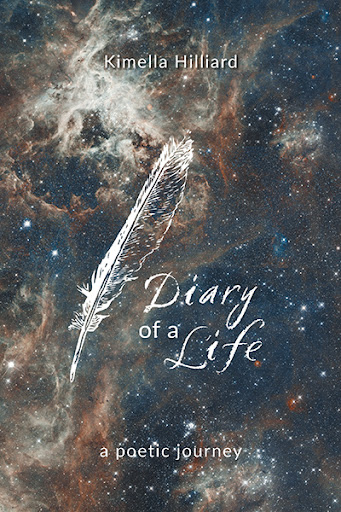 Diary of a Life
A Poetic Journey
by Kimella Hilliard

Life is full of poetry, whether or not we take the time to recognize it or put it into words. Diary of a Life takes its readers on the poetic journey of author Kimella Louise Gosse, leading us through her childhood and adolescence, her adult years of freedom and travel, motherhood and matrimony, and everything she discovered when her marriage ended and she learned to embrace herself and the world around her.

With narrative storytelling and thoughtful poetic offerings, she clearly illustrates the ebb and flow of life, from slow-moving stream to rushing white water, and invites her readers to join her on the ride, as spiritual beings enjoying a human experience of acceptance and purpose.

Born in Prince George, British Columbia, Kimella Hilliard moved with her family many times while she was growing up, and continued the trend after she left home. Over the course of her travels, she came to realize the power of poetry to capture and express her feelings and experiences, as she sought to accept and nurture herself and her place in this world.

In 2006, Kimella won third prize in a Reader’s Digest “Canadian Woman” story contest, with an entry titled “The Peace Treaty,” and has had a number of her poems acknowledged favourably with Editor’s Choice awards. She hopes readers of this collection will see themselves in her stories and poems, and feel seen, understood, and connected.

Now retired, Kimella lives in the village of Saanichton on Vancouver Island, British Columbia, and enjoys the freedom and solitude of living alone.