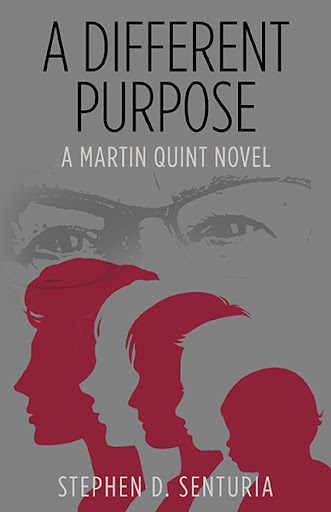 Professor Martin Quint’s marriage to Jenny has been compromised by a sexual indiscretion. Can trust, once shattered, ever be restored? In A Different Purpose, a skilled therapist guides the troubled couple into exploring past traumas amid a sudden tripling of Martin’s academic load and an unnerving racial incident at his son’s school. They discover that to blame is easy, but to understand, and, hence, to forgive, is not. In this, the final volume of The Martin Quint Trilogy, some questions are answered, but others arise that have no answer.

“In this second of a planned trilogy, Senturia continues his remarkable, compelling and imaginative balancing act exploring family tensions, male-female relations in the academy, and how university education might best be accomplished. The tapestry of plot threads is rich and engaging, leaving one eager to know how it finally emerge from the loom worked by his rich knowledge and experience.” —Peter Strauss, Columbia University

“Another great Martin Quint book. … Takes a considerably darker turn that its predecessor, giving the reader real insight into Martin as a flawed human being ... a detailed and nuanced picture of academic life.”

Stephen D. Senturia spent 36 years as a Professor of Electrical Engineering at the Massachusetts Institute of Technology and is the author of three prominent textbooks, several hundred scientific papers and a clutch of patents. He was elected to the National Academy of Engineering in 2003. Since retiring from his life in high technology, he has turned to fiction, exploring in The Martin Quint Trilogy the hopes, the realities, and the stresses of academic life.