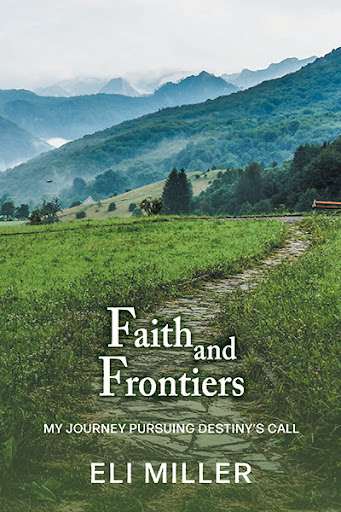 Faith and Frontiers is a story about how trusting in God leads a man and his wife into unchartered territories and allows them to soar to new heights. In his inspirational memoirs, Eli Miller shares how even as a young Amish boy in Ohio he knew his path lay outside the community. Leaving his home at the tender age of seventeen, and with very little real-life experience, Eli soon finds his life is off track – so much so that even meeting and marrying the love of his life is not enough to settle him down. But then in a moment of despair, an encounter with the Holy Spirit turns his life around and sets him on a path to share the Word of God with others.

As Eli continues his spiritual journey and becomes an ordained minister, he and his wife take a leap of faith and become founding members of a Christian community that embraces a frontier lifestyle in the wilderness of Northern British Columbia. After a multitude of adventures, and several years and children later, Eli then leans into his next calling and moves back to “civilization” where he becomes influential in the development and growth of several congregations and begins to lecture and minister across five continents. Told with humour and sincerity, Eli recounts the trials and tribulations of a lifetime of living on faith and shares the message of hope that he has spent his whole life proclaiming.

An ordained minister for over 50 years, Eli hopes his story will illustrate to others that “humble beginnings do not limit personal dreams and opportunities and that they can trust God to equip and provide for them when they are challenged with unfamiliar life circumstances.”