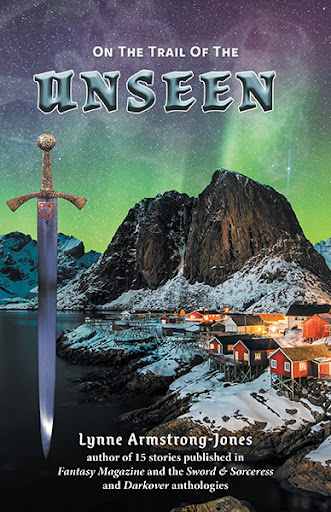 On the Trail of the Unseen
by Lynne Armstrong-Jones

As a swordsman, Nico has battled many enemies over the years and met formidable challenges, but what good are his warrior skills when it comes to fighting against illness? Like many others, he and his wife and daughter have no choice but to flee the plague, heading north to his homeland.

Along the way, they face many dangers and uncertainties, but they also find an old friend who is fleeing with his family. Their other friends, the sorcerers Xyron and Giever, as well as the Witch, Creda, are heading north to avoid the plague after trying in vain to find a way to stop the disease and help the people. Back in the sorcerers’ Tower, the sorceress Aislin finds a possible solution to stop this terrible threat. However, putting her plan into action could place her entire future in jeopardy.

"Armstrong-Jones' latest installment of her emotionally satisfying series skillfully commiserates with readers about the global struggle against the Covid-19 pandemic . . . A hopeful and cathartic entry in a warmhearted fantasy series."

"Lynne Armstrong-Jones is an amazing fantasy writer who knows how to create unique plots with lots of twists and unexpected turns. Her characters are colorful and complex ... " - Reader Views

"A smart, gripping, and skillfully constructed novel of fantasy ... A definite winner." - The Prairies Book Review

Lynne Armstrong-Jones started writing novels about twenty-five years ago, sending out manuscripts to all of the major publishing houses. However, her financial situation dictated that she get a steady job, so off to work she went. When she finally found time to write again, she picked up where she left off with the manuscripts she’d written many years before. Those manuscripts became On the Trail of the Ruthless Warlock and On the Trail of the Wind’s Tears, the first two books in this series.

Lynne lives in London, Ontario, with her husband and three cats. To learn more about Lynne and her books, visit www.lynnearmstrongjones.com.