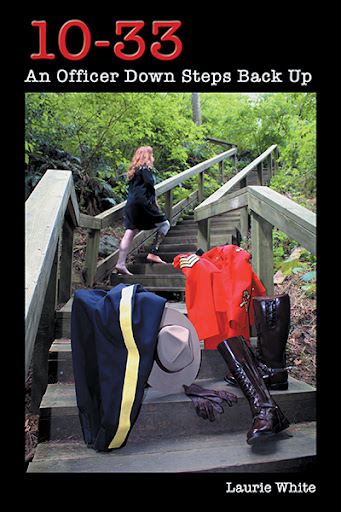 10-33
An Officer Down Steps Back Up
by Laurie White

10-33 – the portable radio code every police officer dreads. “Officer down.”

On November 27, 1998, Laurie White, in her third year as a constable with the Royal Canadian Mounted Police, was that “Officer down.” Shot in the line of duty, Laurie had to have her right leg amputated below the knee. 10-33 – An Officer Down Steps Back Up is an inspiring memoir revealing her struggles to adjust to her new normal while working to return to active duty with the RCMP.

In this memoir, author Laurie White shares her physical, emotional, and psychological struggles, while making inspiring observations based on life experiences as a person with a disability, a first responder with post-traumatic stress disorder, and as a single parent. White’s experiences inform her belief that emotions resulting from pain, loss, grief, and trauma are highly relatable, and transcend individual circumstances. This memoir describes how facing our struggles with humility and humour can help us to overcome adversity and build resilience. Readers will learn that sharing vulnerabilities and challenges can create unique opportunities for personal growth, increased awareness, and higher levels of empathy. White shares her journey in an authentic way so that others facing adversity realize they are not alone in their ongoing struggles to achieve and maintain physical and mental health.

10-33: An Officer Down Steps Back Up is the memoir of an incredible young woman whose journey through traumatic injury provides insights and lessons we can all benefit from. It tells the story of a young woman who graduates university in Ontario without a clearly defined life strategy to harness that education. Laurie White recounts her search for direction, meaning, and purpose prior to her decision to become a member of the Royal Canadian Mounted Police. She recounts the degree of commitment and the challenges she faces while attending Depot in Regina, Saskatchewan and graduating to earn the title of “Mountie”.

Posted from her home in Ontario to a community in Northern British Columbia, she is tested by the demands of learning police work. Despite being a single woman without readily available local personal support systems, she establishes herself as a competent, well-respected constable.

Less than three years into her career, she is seriously wounded by a gunshot while serving an arrest warrant on a career pedophile. Her injuries require amputation of her right leg below the knee.

Laurie recounts the impact of the loss of her leg over the next several years as she struggles to regain her position as a fully operational police constable with the RCMP. She is the first in organization history to return to full duties with a prosthetic leg. Laurie’s story is full up heartbreaking, and yet uplifting. She recounts how she faces and overcomes physical pain and limitations that most of us cannot imagine, only to be nearly broken by emotional and psychological issues. Her journey over the ensuing years into establishing a “New Normal” redefines the dimensions of her identity as police officer, woman, mother, wife, and friend.

Although this book should be well read within the law enforcement profession, it should not be seen as a for-police-only volume. It is a story of the human experience in overcoming trauma and living with a disability. Laurie shows how her initial battle is to survive her wounds and accomplish tangible goals; later, she moves past mere survival and begins to thrive and grow in life.

This book is written from a deeply personal perspective, and that demands a lot of courage on the part of the author. Once I began to read “10-33”, I found it difficult to put down.

Author of Emotional Survival for Law Enforcement: A Guide for Officers and Their Families

Laurie White is, in one word, amazing! Reading her life story (so far) is to recognize one’s own shortcomings because it is simply hard to imagine doing what she has done, despite being visited with severe trauma just as you are embarking on life and career. What a trooper and what an inspiration for others in policing and elsewhere. Mental and physical roadblocks are mere challenges to be overcome. That is what Laurie did, with grace, with determination, and with professionalism. She is the role model and, I can also attest, she is a lovely and warm human being who anyone would love to say, as I do, that she is their friend. Kudos, Laurie…

Laurie White served in the Royal Canadian Mounted Police from 1996 to 2020, when she retired as a sergeant. She survived a gunshot while attempting to execute a search warrant at the residence of an alleged sex offender in Kitimat, British Columbia. Her injuries were so severe that her right leg had to be amputated below the knee. Laurie successfully returned to her RCMP post after only ten months of rehabilitation, likely becoming the first police officer in Canadian history to have returned to full, unrestricted policing duties with an artificial leg. As a woman with an amputation, as a survivor with a permanent disability, and as someone who lives with PTSD, White is a sought-after inspirational speaker within the policing world and beyond. She has received several awards, including the prestigious Governor General’s Meritorious Service Medal and the Medal of Valour from the International Association of Women Police.

White is a graduate of Brock University and the University of Ottawa, as well as the RCMP Training Academy (“Depot”). She lives in British Columbia with her children, Rachel and Brett, and their dog, Molly.