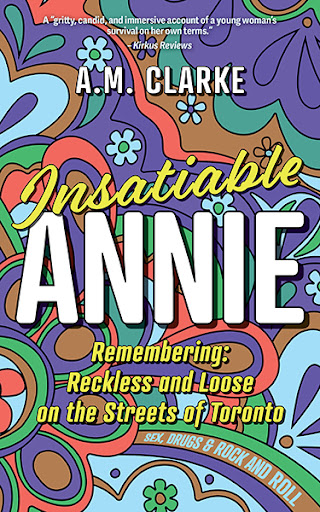 Insatiable Annie
Reckless and Loose on the Streets of Toronto
by A. M. Clarke

Do you remember a time before computers? AIDS? smartphones? social media?

Can you recall when disco reigned supreme? smoking was common? young women hung out in hip-hugger, bell-bottom bluejeans and halter tops? you made calls on a payphone?

Can you flash back to toking up, snorting coke, drinking excessively, and dancing the night away?

If these scenes seem familiar, perhaps you came of age during the sixties and seventies. If that’s so, this exposé of the author’s experiences and misadventures will resonate and help you follow memory’s lane into a less cynical, simpler time when bad things didn’t seem to have as long-lasting effects as they do today. You interacted, as the author did, with real people, face-to-face, in real time.

This explicit memoir provides an entertaining, sometimes heart-wrenching, and always thought-provoking revelation of one woman’s experience growing up in Toronto during the sixties and seventies. Having experienced and witnessed abuse as a child, she had to grow up quickly and learn to take care of herself. She took advantage of the free-love era, drug use, and alcohol. But as the years passed from the seventies into the eighties, she somehow felt that life had more to offer, and she struggled to make her life better and to have meaning.

This honest, plain-spoken account reveals how a self-indulgent, pleasure-seeking, unsettled, and unsatisfied young woman can, at the same time, be a caring and compassionate person with hopes and dreams like everyone else. This is the real story of a woman’s journey from childhood to womanhood during a time that has been like no other.

"Frank and heartfelt, this powerful account will speak to the troubled souls of today’s youth. From Toronto’s streets to Ontario’s pool halls and nightclubs, Clarke’s coming-of-age story is punctuated with wild and wanton times in vivid settings. A woman of substance in a sometimes-shallow world, the author endured a trial by fire and emerged determined to succeed both personally and professionally.

Readers will be swept away by this gritty, candid, and immersive account of a young woman’s survival on her own terms."

Ms. Clarke dreamed of writing a book one day, but it was only when the COVID-19 pandemic struck and she was retired by her employer that she considered fulfilling her dream. After retrieving from storage a dusty box of her decades-old journals, several of which she wrote as a teenager and young woman, she began to read through them. She found inspiration from these journals and within a year, Remembering: Reckless and Loose on the Streets of Toronto materialized.

In her thirties onward, she worked as an administrative and executive assistant in both provincial and municipal governments. In her fifties, she changed occupations and became a Health Support Worker and Fitness Instructor for seniors. Now in her sixties, Ms. Clarke lives a more quiet life but still enjoys movies, reading, music and live concerts. She also loves to travel. Journal writing remains a regular pastime.

Ms. Clarke lives just north of Toronto with her cat, Joey, and spends weekends and holidays with her long-time boyfriend. She also looks after the needs of her elderly mother who lives nearby. She now dreams about becoming a successful fiction author one day.