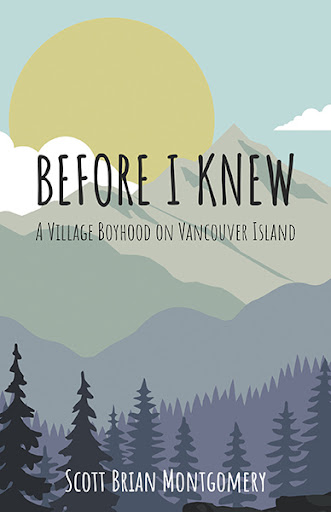 Stuey Moore is in trouble—again. When he’s not carving his initials on the family piano or stealing his mother’s prized curling gloves for dubious winter “sports,” the somewhat impulsive youngster is likely buying candy at Mr. Beck’s store, or riding his bike up Hospital Hill after watching actual dog fights in the village of Sunderland.

Before I Knew: A Village Boyhood on Vancouver Island, is a fictionalized memoir set in the 1960s on the West Coast of British Columbia. This coming of age book is brimming with vignettes and humorous personal anecdotes detailing a bygone era in a coal-mining town whose heydays are dwindling. It’s a time when Vancouver Island’s resource-based industries lured Asian and European immigrants to the small village, creating Stuey’s friendships with boys nicknamed Foo and Norgy. And it’s a place where—hidden from the watchful gaze of their parents—kids ran across log booms floating on lakes, looked for treasures at the town dump, snuck glimpses at “skin” magazines, and somehow returned home largely unscathed, despite their shenanigans.

Told through Stuey’s eyes, Before I Knew beautifully blends Canadiana and nostalgia in snapshots that chronicle his life from childhood to his awakening as a young adult.

Scott Brian Montgomery lived in “Sunderland” during his entire childhood before moving away for university in 1974. Formerly an elementary school teacher and school counsellor, he currently works as a registered clinical counsellor. Montgomery is also the author of Another Lonely Night on the Planet Mars, a collection of lyrics for 53 original love songs.

Montgomery still lives on Vancouver Island, residing in Courtenay with his wife. They have three grandsons (all under the age of five) who live close by, so he’s never far away from boyhood.