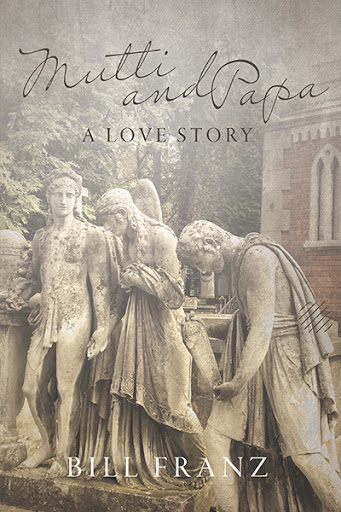 Mutti and Papa
A Love Story
by Bill Franz

When Nazi Germany invaded the Soviet Union in 1941, Stalin ordered the deportation of Russian citizens of German descent to Siberia. After his father and uncles were sent off to the Gulag, sixteen-year-old Johann Franz volunteered to join the Wehrmacht as an interpreter. This eventually saw him wounded and evacuated to Austria. He met and fell in love with the young Polish-born Ella Weber in a refugee camp in Germany.

The product of more than sixty years of reflection, Mutti and Papa is a family history that traces the love story of the parents of author Bill Franz, Mennonite refugees fleeing war-torn Europe, over the course of World War II. The story is largely told through their love letters to one another, across continents, while his father, Johann, awaits immigration to Canada to join his fiancée, Franz’s mother, Ella. Beyond these letters, a patchwork of fascinating secondary sources is consulted to present a fuller picture of the Franz family history, which, in turn, gestures to cultural legacies of Mennonite migration to Canada and involvement in World War II more broadly.

Set against the backdrop of the cataclysmic events of the Holocaust and Second World War, the love story of Ella and Johann is at once a fascinating historical account, a happy romance, and an earnest examination of what it’s like to strive for a future while struggling to cope with life as a refugee. Offering a fresh perspective on the layered and nuanced histories of the Holocaust, Mennonite culture, and love during wartime, Mutti and Papa is sure to interest history buffs and romantics alike.

Bill Franz is a writer, water management specialist, father, and grandfather, originally from Winnipeg, Manitoba. A first-generation Canadian descended from Mennonite immigrants who fled Eastern Europe during World War II, he is a current director at the Mennonite Historical Society of Alberta. He is interested in bringing Mennonite histories to light—particularly surrounding the Holocaust and Nazi Germany.

While Mutti and Papa is Franz’s first book, he has made contributions to publications on topics relating to soil and water management, and his account of his 2018 trip to Ukraine and Russia, “A Journey in Time,” was published by the Historical Society’s newsletter, The Chronicle, in March of 2019.