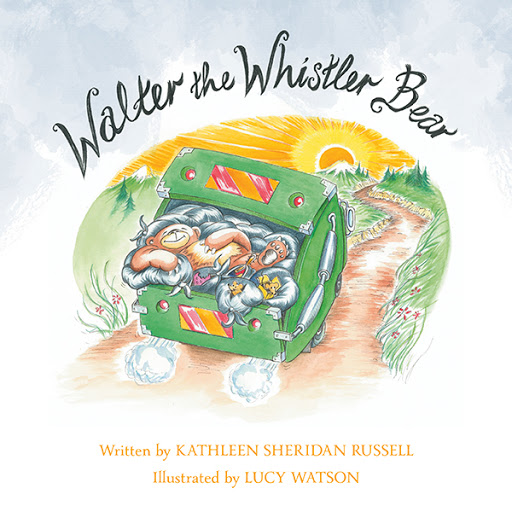 When Walter the Whistler Bear is tempted down the mountain in search of a snack, he hops into a garbage truck where he gobbles up a feast, falls asleep, and accidentally arrives in Vancouver. As Walter wanders through Stanley Park, he soon discovers that bears are not the most welcome of visitors. Well, that is, until he meets a friendly boy with his tiny teddy and the trio’s fun-filled adventure begins.

This amusing rhyming book will delight parents and children alike. Walter the Whistler Bear is an adventurous tale about exploring new places, making friends and (most importantly) about finding food.

KATHLEEN SHERIDAN RUSSELL learned what sorts of adventures appeal to children during more than 20 years of family holidays in Whistler. Kathleen’s family includes her son Cameron, her daughter Lindsay, two lovable dogs, and a crazy cat. This is her first book.

LUCY WATSON lives in the United Kingdom and has enjoyed family holidays in Whistler and Vancouver. She is passionate about encouraging children to seek out new experiences and believes that amusing illustrations can help pave the way (perhaps along with a snack or two!).

ALASDAIR CAIRNS RUSSELL, at age 14, read an article about a bear cub in Whistler that fell asleep in a garbage truck and awoke in Vancouver. Alasdair was relieved to learn that the cub was safely returned home, but he wondered what the bear actually did in the big city. From this premise, Alasdair created Walter the Whistler Bear, a lovable cheeky cub who had a fun day exploring Vancouver. Kathleen and Lucy took inspiration from Alasdair’s original ideas and artwork to craft Walter’s story.