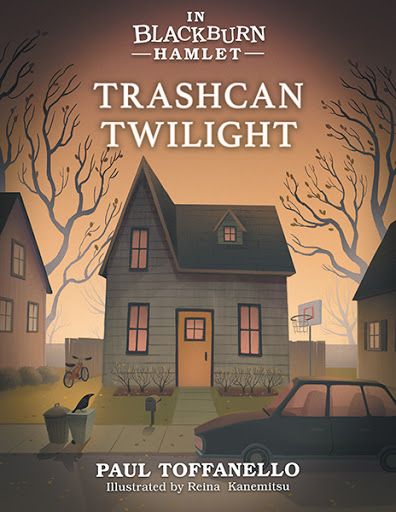 Trashcan Twilight is the story of a young girl who is babysitting one night in Blackburn Hamlet. She falls asleep watching television but is awoken by an eerie sound coming from the back yard. When she steps out to investigate, she quickly runs back in the house and locks the door, fearful and astounded by what she sees and hears.

Paul Toffanello grew up in Timmins, Ontario, a small, vibrant mining town. He graduated from Carleton University with a major in English and minor in Psychology. He then graduated from the Nipissing University teacher program. He became an elementary and secondary teacher before becoming a Principal, Superintendent, and finally a Director of Education.

Paul has a deep understanding of how to engage children in reading and writing. Paul is the author of the Popchuck Chronicles www.thespookyauthor.com. Currently, he works as a Consultant in education, health and small business. As well, he is a private counsellor. Paul lives in Vancouver for part of the year, and in New Liskeard, at the cottage on Twin Lakes, for the summer months.

Reina Kanemistu was born in Suzuka, Mie Prefecture, 2 hours north of Osaka, Japan where she lived with her parents and brother.

Reina has travelled throughout her life and has lived in Japan, United States and Canada. Reina spent her high school years at Emily Carr Secondary School in Toronto. She graduated in 2008. Reina then attended Sheridan College in Oakville where she studied Art Fundamentals and Animation Programming.

Reina began working full time as an illustrator, animator and background painter. She recently decided to pursue a career as a freelance artist, and began working in Vancouver, British Columbia where she currently resides. She continues to work with Paul Toffanello on other new and upcoming projects.