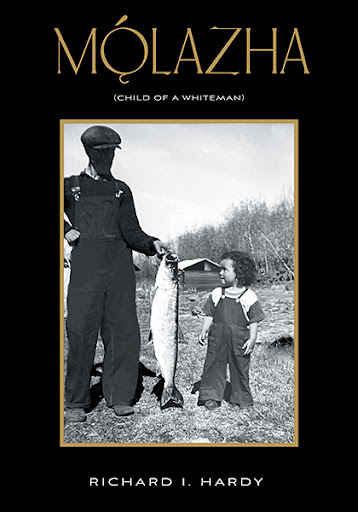 Mǫ́lazha
(Child of a Whiteman)
by Richard I Hardy

Mólazha (Child of a Whiteman) weaves three central tales together to tell the story of Richard I. Hardy, commonly known as Rick, against the backdrop of his ancestors. This is a story of survival and resilience.

Rick’s European ancestors started coming to North America in the 1600s, settling in Nova Scotia as Acadians. Their progeny came to the Mackenzie River District of the NWT in 1851, creating new families and establishing ties to the fur trade. Rick shares stories of family and growing up Métis in the small town of Fort Norman, NWT, and how being Métis coloured his interactions with the Indian, Métis, and White people there.

When he was sent to residential school, he was the third generation to attend, following his grandparents and mother. Sexually, physically, and mentally abused over a two-year period, while at a Catholic residence, Rick was only 15 when he was a witness at the criminal proceedings after the perpetrator was caught. He suffered for many decades as a result of what happened to him, and firmly believes that the Catholic church not only knew what was happening to him and the other residents, but also did nothing to protect them.

Rick is a retired lawyer who practised law for over 35 years and has been involved in the Mackenzie River Métis community for at least 60 years. He is Métis and has spent his life, from childhood, defending and advancing the rights of the Métis of the Northwest Territories, particularly those from the Mackenzie River District. He is no longer a member of a law society but is called upon, from time to time, by his people, up North, to provide guidance on difficult issues.

Rick was born and raised in the Mackenzie River District, and received his early education there. He went on to receive his LLB from the College of Law at the University of Saskatchewan in 1981. He is a recipient of The Commemorative Medal for the 125th Anniversary of the Confederation of Canada in recognition of significant contribution to compatriots, community, and Canada. In addition, Rick is also a recipient of the Queen Elizabeth II Diamond Jubilee Medal.

Rick lives on Vancouver Island with his wife Maryann and their pets, and has three children and six grandchildren. Mólazha is his first book.