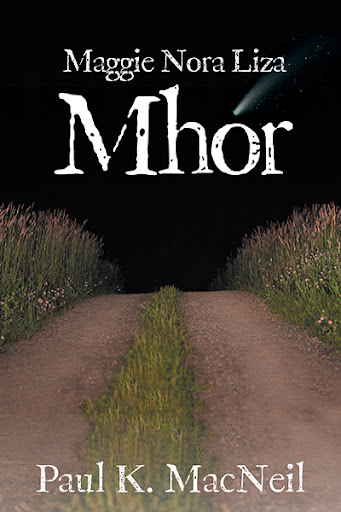 Twenty-five-year-old Maggie believes she is a miracle baby. A child who was conceived inexplicitly and possibly through some sort of ancient magic. Having been raised by her grandmother, she sets out to find proof of the mystical tales related to the conception of life. Maggie is also searching for her family identity, her own sense of person, place, and belonging.

This quest leads her to rural Cape Breton where she partners with a young man named Patrick. Romance blossoms in the present as the pair delve into the past. They experience numerous events with local personalities who help them understand the meaning of life, love, faith, and friendship. Maggie’s curiosity leads her deeper into her personal origins, but the answer may very well lie in another world altogether…

A romance for the ages imbued with Celtic magic, local detail, and unforgettable characters. Maggie Nora Liza Mhór is a delight for anyone with a love of Celtic myth and Cape Breton’s many treasures.

Paul MacNeil grew up in central Cape Breton neighbored in Gaelic culture, characters, and tradition. As a musician, he has recorded two albums of Cape Breton-style pipe music and has shared the stage and studio with many of the Island’s most famous performers. He has been composing music, poetry, and songs most of his life and has now completed his debut novel. One of his songs, “The Forest,” was the inspiration for Maggie Nora Liza Mhór.

Paul and his wife Tracey have five daughters who live in Mabou Harbour, a small community on the west coast of Cape Breton Island. Music and Gaelic culture are rooted in their home transcending towards the next generation. Fifteen original tunes and songs are contained in this novel to guise as a soundtrack to the tale.