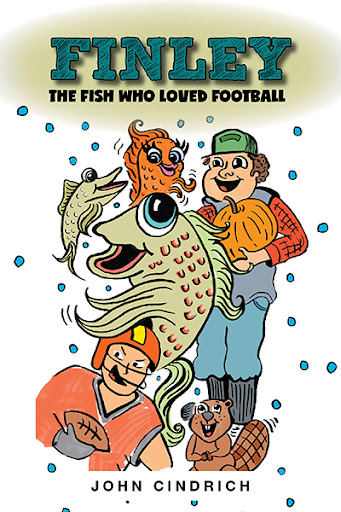 Finley the Fish Who Loved Football
by John Cindrich

What if a fish wanted to go to a football game?

That’s the question facing Finley, a river fish, and his underwater friends. Finley and company, a clever, hard-working, and creative bunch, fire up an old TV they find sunken in the river. Before long, Finley falls in love with watching football, and he dreams of traveling to the stadium to watch a game.

Using odds and ends from an old submerged junkyard, Finley and his quirky crew hatch a zany plan. They stumble into strange landscapes, dodge pumpkins, and crash into crazy football fans, defying overwhelming odds to get Finley to the big game.

Full of fun (and sneakily educational), Finley, the Fish Who Loved Football proves that with good friends, creativity, and hard work, a river fish can make a big splash in the world of humans…even when he’s up to his gills in madcap mayhem.

While attending an NFL game, John Cindrich saw a fan wearing a novelty ballcap with a foam fish sticking out the front and back. John asked himself: What if a fish wanted to go to a football game? Finley, the Fish Who Loved Football is the hilarious answer to that burning question.

A U.S. Army veteran, John served in Italy, and deployed to Iraq and Afghanistan. Previously, he was a staff writer for The Daily News of McKeesport, Pennsylvania and a finalist for the Press Club of Western Pennsylvania’s Golden Quill Award. John lives in North Versailles, Pennsylvania.