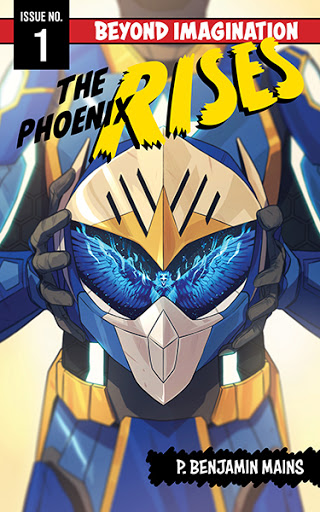 The Phoenix Rises
Beyond Imagination
by P. Benjamin Mains

Riley “Brendan” Major is a middle-aged geek trapped in a dead-end retail job and feeling that his life is one colossal failure. Strange dreams of another life plague him, dreams of superheroes and monsters that become frighteningly real when a boy in red armour appears and accuses Riley of a betrayal from decades past, then kills him in revenge. Instead of dying, Riley wakes up in a timeless Neverland-like world where he is a child again, and people he had lost in the real world are alive once more.

There he discovers he is one of five people who were part of a group called the Knights of the Cosmic Grail. He is Brendan, Phoenix Knight of the Blazing Light. Dark forces beyond imagination have reappeared in that world, and he and the other knights must battle them. As he strives to adjust to life in a world that only existed in his childhood daydreams, he and his compatriots must find a way to work together. If they cannot protect this world that the boy in red exiled them to, the world they were forced to leave behind will also suffer.

P. Benjamin Mains has a BA in English with a minor in history from the University of Lethbridge. His main inspiration for writing this book was a series of recurring daydreams of becoming a superhero he has had since the fourth grade, which means this novel was twenty-five years in the making. Not surprisingly, one of his main hobbies is collecting comic books, with a particular focus on DC comics from the Silver and Bronze ages. With a firm belief that a day is wasted if he doesn’t learn something new, he also enjoys random trivia and studying astronomy and history. Originally from Lethbridge, Alberta, P. Benjamin Mains now makes his home in Calgary.