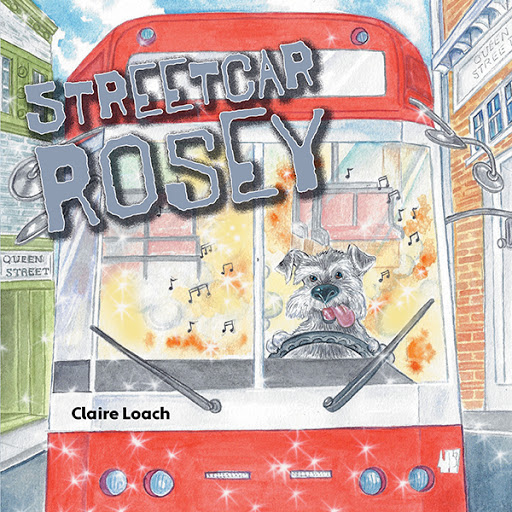 Rosey the schnauzer loves to ride the rails. Whether it's a subway or a streetcar, she and her human friend Claire can be found having the time of their lives in Toronto. On Hallowe'en, they board the Queen streetcar ready for an adventure. But they get a whole lot more than they expected! When a spirit appears and plays a magical flute, little Rosey gains the ability to speak, and finds herself driving the streetcar! The two go on a grand adventure through the city, and say their goodbyes when the flute playing spirit returns. But they know this won't be the last time. Rosey has a thing or two more to say.....

The story has wonderful flow, magic and poetry. As a bonus, there is a video of the joyful song "Streetcar Rosey", written and performed by the the author that can be seen on youtube (claireloach).

Claire Loach is the daughter of a retired nurse/librarian, and a piano playing engineer. She has lived in Toronto for over sixty years. She is a registered nurse at an adult oncology clinic. Prior to that, she worked for many years at The Hospital for Sick Children in the Haematology/Oncology Clinic. She recently published a wonderful children's book called "DEREEKIO'S BIG ADVENTURE" which she wrote thirty-two years ago with her six year old patient receiving chemotherapy at the time. He is now thirty-eight years old and they reconnected and decided to share their wonderful and inspiring story.

She has also recently published a fun and magical book called "My Aunt's Ant's AUNT", which was inspired by her nephews and nieces.

Claire has always had a dog in her life. Rosey the schnauzer has been with her for the past five years. The dog's love of riding the transit inspired Claire to write "Streetcar Rosey".

Claire is also a skilled pianist and songwriter, which adds another dimension to her stories. Her delightful songs written specifically for her books, can be found on youtube.