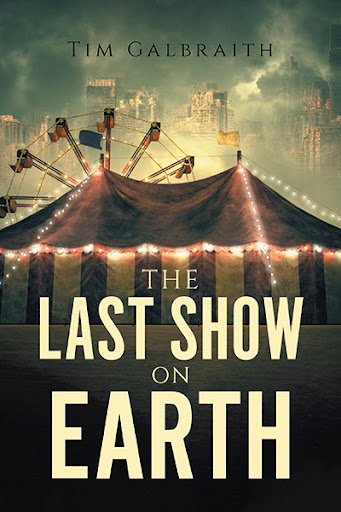 The Last Show on Earth
by Tim Galbraith

Nearly ten years since the rapture and humanity is no longer the top of the food chain. God has taken his followers to heaven and left demons to rule earth in his wake. Those left behind seek to find either redemption in the eyes of their creator or revenge against him.

An amnesiac awakens amongst those who are seeking redemption. They offer to help him find out who or what he is as he discovers an unexplainable ability in his attempts to protect them.

A set of brothers have an item that they believe can bring them face to face with God to make him answer for crimes against humanity.

Shining through the darkness, a group of survivors has come together under the lights of the last piece of entertainment left on this world, a traveling carnival, led by a mysterious and enigmatic man who has dubbed himself “The Queen.”

These stories interweave with each other on their individual journeys through post-rapture Earth before they find their way to the City of God and face down their creator.

Tim Galbraith was inspired to create since he could pick up a pencil. He hopes to inspire people the same way that he was through fiction and fantasy to create their own tales and share them with others. An avid fan of independent comic books, and music, Tim brings that same DIY sense to the stories he tells motivated by the heroes of those mediums.