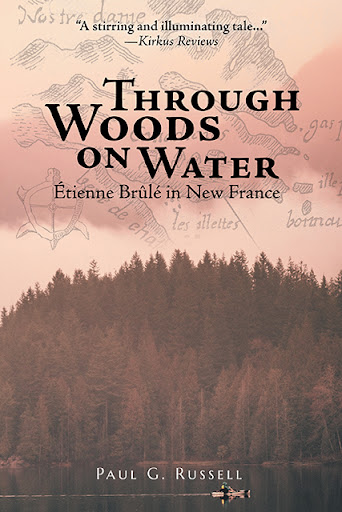 Through Woods on Water
Étienne Brûlé in New France
by Paul G. Russell

“Through Woods on Water” is a novel, an historic fiction: the life of Étienne Brûlé “as it might have been.”

Set in the first decades of the 17th century, it is a coming of age story, a clash of cultures, a saga of exploration and adventure that rebounds between the enclosed corridors and courtyards of Paris, across the open, storm-tossed Atlantic, to the wilderness waterways of the vast Canadian forest. Savignon and Étienne, Wendat and French, are in their mid teens when they meet on the shores of the broad St Lawrence River, brought there by the chalk-faced shaman Ostemoy and the determined navigator Champlain. Inspired by the Wendat heroes Iouskeha and Tawiscaron, who gave shape and texture to the world of the Wendat, the two form an unlikely lifetime bond symbolized by the half turtle Oki or talisman that each wears about his neck. Their connection intensifies through decades of wandering, discovery, torture and adventure, until it concludes with a final confrontation by the Sweetwater Sea. Only then are the halves of the Turtle Oki fused once more.

"A stirring and illuminating tale..."

Paul G. Russell is a writer, director and artist with studies in art history (MA) at the University of Toronto and further research overseas in history, sculpture and painting, at London's Courtauld Institute, St Martins School of Art and Sir John Cass College.

He has been fascinated by the adventurers of New France, especially Étienne Brûlé, since he first encountered them in elementary school history lessons. In the 1970’s he wrote a television show on New France entitled “The Magic Circle” for the CBC series “Images of Canada,” then published "The Beauty of Quebec" with Photographer Hans Blohm (1984). He has ruminated on Brûlé and a possible novel since that time but joining the WEG writers group in Toronto brought the project to life.

His publishing credits include:

Deco Metropolis, Introductory essay to Tim Morawetz's, Art Deco Architecture in Toronto: A guide to the buildings from the Roaring Twenties and the Depression. Glue Pub. Toronto 2009

He has curated exhibitions, lectured and written extensively on the arts in a variety of publications including The Globe and Mail, The Toronto Star, Canadian Art, Toronto Life and Ornamentum.

Mr. Russell lives in Toronto and has a studio and art practice in Hamilton, Ontario.

This is his first novel.