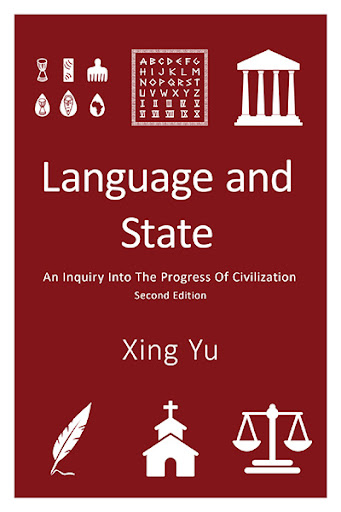 Language and State
An Inquiry into the Progress of Civilization, Second Edition
by Xing Yu

This book argues that while humans communicate using language, they create and use media. Media extend the distance of communication. Humans form themselves into a large community. This happens in a long historical process in which the state of the civilized society replaces the tribe of the primitive society. Language replaces kinship in playing a role in the formation of human society. Then this book argues that while humans communicate using language, they form political, economic and cultural communities which in turn jointly sustain the formation of the state. While humans use language in communication, they also create a series of language solutions to the organization of the state. They make a constitution, hold elections and even set up representation when they govern their state in the principle of democracy. Extending the distance of linguistic communication also underlies the formation of government as well as the emergence of three juxtaposing branches of government—administrative, legislative and judicial bodies. By using language in long-distance linguistic communication, humans further create their history, philosophy, literature, art, religion and law which play a role in the construction of people’s spirit that guides the operation and the future development of the state. Language not only gives origin to the state but also presets the whole process of the development of the state. This book offers one of the most systematic theories about the formation, the building and the future of the state.

Xing Yu is a political scientist who taught at two universities in China in the 1980s and 1990s. He obtained a bachelor of arts degree from Sichuan Foreign Languages Institute in Chongqing, China in 1982, and a master of law degree from Fudan University in Shanghai, China in 1985. He now works as a freelance writer and translator in British Columbia, Canada.