Set deep in the disco era, the story unfolds to follow naive young Aaron over the first twelve months of his romance with Adam, a virile, older, complex man from Aaron’s hometown. From navigating his first serious relationship, to seeking the support of his conservative parents, to moving in together with Adam, this romance is focused on the love, intimacy, and growth of its central characters.

J Francis Grice explores the themes of staying together when one partner leaves for College, homophobia, jealousy, and surviving personal crises. The result is an enthralling snapshot of what it took to nurture and sustain a gay male relationship in a time of uninhibited sex and rampant political and social anti-gay sentiment. 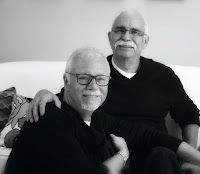 Aaron’s Year of ’77 is loosely based on the author’s own life at this point in the 1970s. J Francis Grice grew up in Brockville, Ontario and left there for college at nineteen. Adam is a composite of several men he knew during this time. The novel’s descriptions of College and Ottawa are as he remembers them.

Today, Grice is retired and lives in Kingston, Ontario, but he spent most of his life and career in Canada’s Capital city working as a professional Interior Designer.

This novel is dedicated to his late partner and husband of forty years , Stephen D.