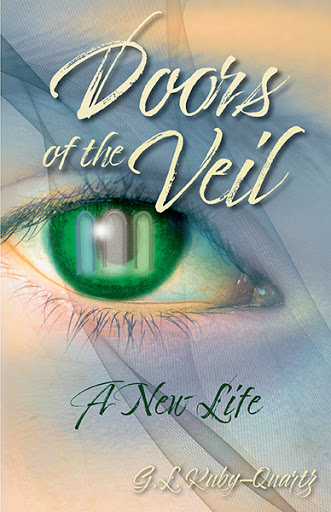 Doors of the Veil
A New Life
by G.L. Ruby-Quartz

When Lucinda is molested by her uncle, a charismatic small-town pastor in the Oklahoma Bible Belt, her parents react to her accusation with abuse, not support. One town over, sixteen-year-old Mary emerges from a coma to cruel gossip and unorthodox desires. Further north in Alberta, Canada, a trio of Mormon boys unfairly judge nine-year-old Damien due to his parents’ divorce; they nearly stone him to death in a self-righteous kangaroo court. Lucinda’s cunning uncle, Pastor Bill, is connected to all three youths as he navigates his own relationship with religion, power, and morality.

Lucinda, Mary, and Damien don’t know each other, but they have something in common: their trauma has allowed them to see and touch the Doors of the Veil, triggering supernatural insight and abilities. But even with their newfound powers, these young people are up against potent societal forces and a relentless religious agency seeking to silence them at all costs. In a world where patriarchy and the church’s authority are embedded in every aspect of life, will Lucinda, Mary, and Damien emerge triumphant . . . or fall victim to religious zealots?

The first in the Doors of the Veil series, A New Life takes aim at the hypocrisy of society and its religious institutions. Journey through a world of lies, deception, and betrayal as three young people struggle to shed the victim role and cast off societies expectations and judgment.

G.L. Ruby-Quartz is a new author who lives in Sherwood Park with family and four amazing dogs.