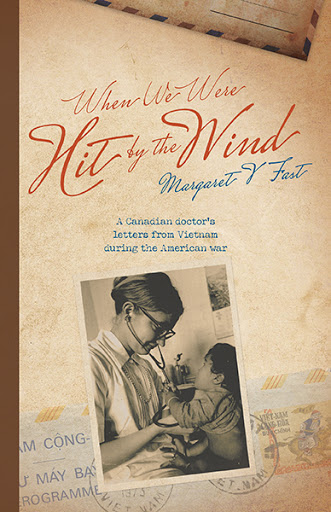 VIETNAM. In the western world, the name itself conjures up specific images and feelings: oppressive jungle heat; young, battle-weary soldiers far from home; political upheaval at home and abroad … We feel the fear and sadness and anger that always accompany thoughts of war. But Vietnam is so much more than that.

One of the oldest cultures in Southeast Asia, with a wide variety of ethnicities, languages, and traditions, the real Vietnam and its people have been largely overlooked or misrepresented in mainstream media. A young Canadian doctor, volunteering in a Mennonite Central Committee hospital in Pleiku and at a Project Concern hospital in the remote village of DaMpao, in the early 1970s, got to know the country and its people very well.

When We Were Hit by the Wind is a collection of her memories and experiences, shared largely via personal letters written to her family back in Canada. Follow her journey of discovery, empathy, responsibility, war, and love, as it changes not only her perspective of the country forever but her life as well.

Author Margaret V Fast grew up living on farms in rural Manitoba, with strong ties to her Mennonite community, and knew early on that she wanted to be a doctor. She likely never imagined that achieving that dream would lead her to Southeast Asia during an “armed conflict,” but she would not change a thing.

Her experiences taught her that individuals and societies have a responsibility to demonstrate empathy and care for one another. She learned how intricately connected the future is to the past, and we all are to each other. Her time there became the foundation upon which her family was built.

She currently lives in Winnipeg, near two of her three children and four of her six grandchildren.