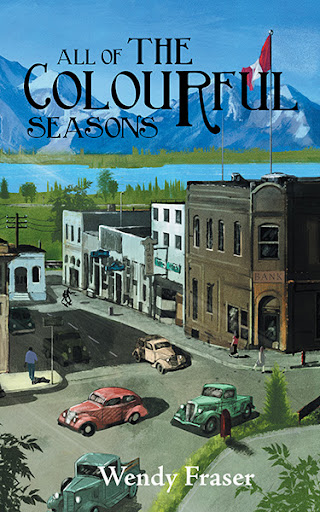 All Of The Colourful Seasons
by Wendy Fraser

The small riverside town has not recovered from The Great Depression, yet WW2 is on the horizon and many young men in town are signing up.

Doctor Ben Harder is embittered with his life, he's married to Louisa, the town tart while his heart still remains with Maggie Hanson. Maggie Bancroft actually since she married her employer. She and her quirky English mum now live the large white Victorian house on the hilltop property.

Ruthless Victor Robertson isn't going to war even though this displeases his Scottish parents, he has passionate ideas of making money. He will make use this situation to find away to fill his pockets and advance himself at any cost. Any cost.

Danette's family are new to town, they barely made the trip in her fathers broken down vehicle. She has knowledge that they are one of the poorest families, always hungry and behind in bills. The worst of it is tolerating her abusive beast of a father, his temper and selfishness inspire her to somehow forge a new and better life for herself.

"All Of The Colourful Seasons" entails of the human conditions including Love, hate, greed, humility and scandal.

As a child growing up, the author once lived in this small riverside town where this story takes place. "Beside The River" was Wendy Fraser's debut, and "All Of The Colourful Seasons" is a stand alone novel, but also a sequel in which more colourful town characters emerge.

The town inspired her to write with its historic homes, apple fields and quiet dirt roads but also the view of the river. She resides on the Pacific West Coast with her husband of 20 years and their big dog Watson.