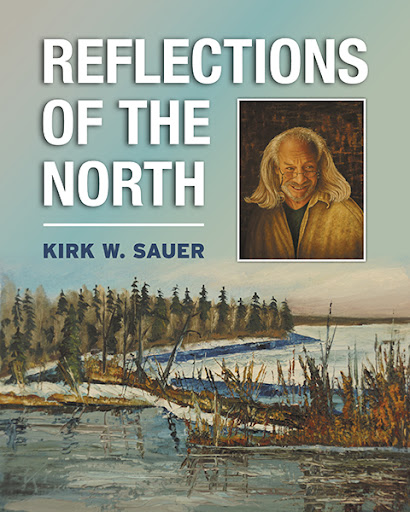 Reflections of the North
by Kirk W. Sauer

The Canadian north is still a mystery to most Canadians. What is it like to live in a constant winter temperature of 40 below zero, with barely 2 to 3 hours of daylight? What is it like to live in a community that lives off the land, where a caribou hunt to provide the winter’s meat is a matter of life or death? The children are taught life-saving proficiency skills in a very direct way by elders and grandparents. Often, the survival skills of hunting and fishing take precedent over learning the three R’s; Kirk accompanied them on hunts, learning along with his students. Kirk writes as he thinks: in pictures. Very visual, he paints charming, amusing and memorable tales of those who cross his path. Who can forget the picture of a shaggy Cross Fox, seizing a scrap of muffin, racing away to bury it, and then coming back for more? Kirk’s own illustrations highlight the book, including portraits of his students, and studies of everyday life in the north. His words and his art capture a northern Canada that we may explore with him. 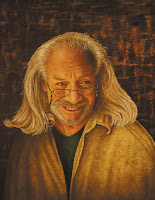 Kirk Sauer spent idyllic summers in childhood, roaming the woods and streams in rural Ontario, learning woodsman’s skills, whistling the songs of birds, learning to throw a knife, carving bows and arrows, and fishing and swimming in the River Thames. He enjoyed a freedom unknown to children today. School, in September, presented a darker side of life. A first-class athlete in track and field, setting the junior Canadian record in pole vaulting, he also excelled in chess. Yet Kirk was unable to read. Letters and words jumbled themselves together, accompanied by sounds that made no sense at all. Despite this handicap, he enrolled in university as a mature student, and received a Fine Arts degree. Following a very successful career as an architectural woodworking designer and salesman, Kirk made a life-altering decision when in his late 40s he enrolled full-time in the Ontario College of Art and Design University in Toronto. A complex and demanding couple of years were followed by a year in Florence, Italy, where he studied under the classic atelier system. Kirk moved to British Columbia where he set up a studio. He was selected to teach the first year Fine Arts course for the University of Northern British Columbia. From there he branched out to teaching First Nations children, first in BC, then in Northern Manitoba. The stories of his 15 years of teaching under challenging conditions are the subject of this book.