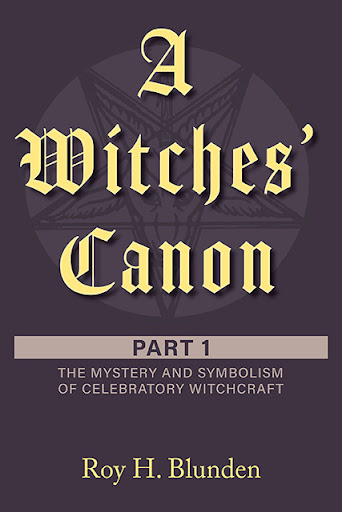 A Witches' Canon
Part 1. The Mystery and Symbolism of Celebratory Witchcraft
by Roy H. Blunden

Traditional Witchcraft and an Exploration of Its Magical Techniques, Rites and Symbols.

The truth is, Witchcraft never altogether went away. The old Witchcraft was driven deep into the shadows only to emerge again as a vibrant, nature-based spiritual practice, well attuned to our modern times. It is a cooperative religion, born in the Stone-Age yet ideally suited for this present Age of Science and Technology. A religion and magical practice of Dance, Fun and Mirth. After all, who said that religion is not to be enjoyed?

A Witches’ Canon, Part 1, was written to provide a fact-based referenced guide for those wishing to further explore the Religion and Celebratory Rituals of Traditional Wicca.

A Witches’ Canon, Part 2, provides a practical, referenced guide to the social aspects of Traditional Wicca; of Coven Organization, Initiations, Rites and Rituals.

A Witches’ Canon, Part 3, is a fact-based referenced guide to the practice of Magical Witchcraft, both nice and naughty.

If it isn’t fun, then it ain’t worth doing.

ROY H. BLUNDEN grew up in Britain during WW II, surviving the London-area Blitz, V-1 flying bombs and V-2 Rockets. He was caught up in the revival of modern Wicca and has been deeply absorbed in the search for the origins and meanings of the complex symbolism used to express Wicca as a transcendental religious faith. Roy practices the Craft as originally taught by “Old” Gerald Gardner, with emphasis on the spiritual and operative aspects of Wicca. Roy has practiced as a solitary Witch and also has belonged to various Wiccan Covens; carefully observing their organizational strengths and weaknesses. Moreover learning what actually worked and what didn’t. Together with his wife, Roy taught and initiated many students of the Craft, stressing a pragmatic approach to Wicca in seeking to always understand the why’s and wherefores of what one is doing. Until his retirement, he was a consultant geoscientist. Roy has abiding interests in history and the study of ancient coinages. He currently resides in Victoria, British Columbia, Canada.

Roy H. Blunden, describes himself as one of the surviving relics of that first wave of British converts to “Old” Gerald Gardner’s newly revived ‘Wica’ — as it was then spelled more than a half Century ago. A time when our inestimable leader in his disastrous press interviews was still describing us as cultists, and when simply being a Wiccan was considered justification for instant dismissal from your employment and children being taken into care for their moral protection. So he was one of the heroic foot-soldiers who quickly learned to keep his head down, for well nigh on a quarter century, particularly while the big-wigs of the Craft – all half dozen or so at a time — were raising havoc in the world’s press. Together with his wife, an American Witch of the second wave when the fratricidal furor was at its’ height, they conducted many public and private rituals. In addition Roy lectured widely concerning the practice, mystery and symbolism of Witchcraft in all its aspects of religious celebration, group and magical workings.