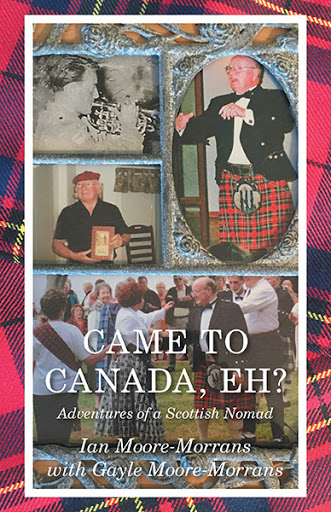 Having emigrated from Scotland to Canada in his early thirties, Ian Moore-Morrans was a Scotsman to the core―despite his love for his adopted homeland―adventurous, humorous, and determined to provide a better life for himself, his wife and two young daughters. In his first memoir, From Poverty to Poverty: A Scotsman Encounters Canada, he shared with his fascinated readers what life was like for him in the early days, from his Scottish roots to his eventual emigration.

In this sequel, we get to learn what happened next, joining him on a journey that takes him and his first wife back and forth across six provinces, with multiple stops along the way, as he struggles to survive and thrive in the face of countless obstacles that would likely have stopped a lesser man in his tracks. With love and humour in his heart, and music in his soul, this extraordinary “common” man was anything but ordinary. Throughout his life, love, laughter, and song carry him through even the toughest of times.

Even after the death of his first wife, which he describes with poignancy, he pushes on, in true Scottish fashion, eventually meeting a new love―the soulmate with whom he shares his final years, full of romance, adventure, writing, singing, a heart-felt appreciation of Canada, and a continued enthusiasm for all things Scottish.

The cover photo is of Gayle’s jewellery box that became Ian’s funeral urn, depicting Ian’s varied avocations–playing his trumpet in a Royal Air Force band; singing as a Scottish performer; displaying one of his published books; and dancing with a Scottish country dance group. The Leslie Clan tartan background represents the addition of “Moore” to Ian’s family name, as the Moore family is a sept of the Leslie Clan. (Ian’s first memoir displayed the McKinnon Clan tartan of which the Morranses are a sept.)

Ian Moore-Morrans, a machinist by trade, as well as a Scottish entertainer―singing and playing in bands for well over fifty years in Canada, the UK, Egypt, and Mexico―and a busy husband, father, and grandfather, rarely found time for writing until his early sixties. After retirement (and marrying an editor), he quickly excelled, being named one of the “50 Great Writers You Should Be Reading” by THE AUTHORS SHOW in 2014. Came to Canada, Eh? Adventures of a Scottish Nomad is his fifth published book.

Gayle Moore-Morrans has spent a great deal of her life writing, both in her work capacity as a Lutheran parish worker, secretary, social-services director, program director, and magazine editor—and in a personal capacity, documenting personal and family happenings. Her true passion, however, lies in editing and enhancing the writing of others, helping them to tell their stories as effectively as possible. In 1999, Esprit, the magazine she edited, received an Award of Merit for “General Excellence (Magazines – Specialized)” from The Canadian Church Press.

Ian died on February 22, 2019, at age 86, but Gayle continues to co-write and edit his accumulated writings in Winnipeg, in a downtown seniors' apartment. She has a wide circle of friends in the city, as well as a stepdaughter/son-in-law, step-grandchildren/great-grandchildren living in Winnipeg, and the same in Flin Flon, Manitoba. Her own children live outside of Canada: a son in San Francisco, California, and a daughter, son-in-law, and three grandchildren in Norway, whom she visits whenever she can.