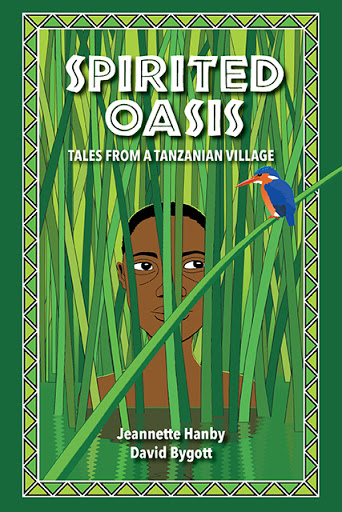 Spirited Oasis
Tales from a Tanzanian Village
by Jeannette Hanby

When two curious biologists seek a new home in a remote part of Tanzania called Mangola, they find adventures in abundance. They are greeted with dramatic scenery, red-dust whirlwinds, a lush oasis, bad roads, and a striking cast of colorful characters.

This fascinating memoir about an intrepid, homesteading couple tells the story of the people they met—foragers, herders, farmers, anthropologists, government officials, and tourists. With humor, pathos and vivid illustrations, they show how they survived and flourished by learning the ways of their fellow pioneer villagers.

Jeannette Hanby has taken on jobs ranging from working with abused and abandoned children in Los Angeles County to placer gold mining in the Sierra Nevada mountains. After completing her Ph.D. dissertation in Oregon on monkeys, she went to Cambridge in England for further study of primates—one of whom, David Bygott, became her husband.

David Bygott began observing wildlife and drawing as a child exploring the countryside of southern England. He was finishing his Ph.D. thesis on wild chimpanzee behavior when he met Jeannette, his partner in field research, conservation, and business for almost five decades.

They now live in an intentional community in Tucson, Arizona, still learning about primate behavior, as well as continuing to travel and explore the world.