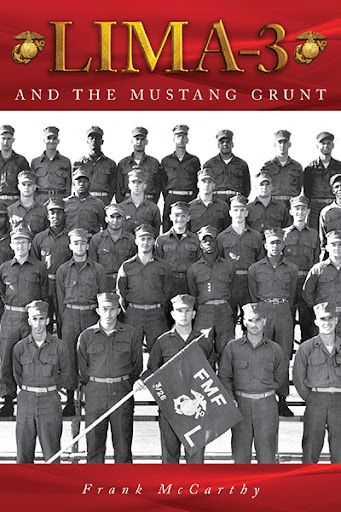 LIMA-3
And the Mustang Grunt
by Frank McCarthy

In 1966, career Marine Lieutenant Frank McCarthy received the assignment of a lifetime when he was assigned as a platoon commander in an infantry battalion preparing for deployment to Vietnam. Following several months of training his men, whom he would soon come to believe were some of the finest Marines ever to wear the uniform, boarded a ship in San Diego and set sail for Southeast Asia, not knowing how many of them would ever see their beloved country again.

Following a harrowing sea voyage that nearly ended their tour before it began, they finally arrived in Vietnam. Though a “cherry” unit with no combat experience, within three short months that all changed. Eighty-two of those first ninety nights were spent in mud filled foxholes or ambush positions, covered with leeches, shivering through the limitless, and cold monsoon rains and incessant enemy mortar fire. Days of endless patrols, in in an area laced with thousands of mines and booby traps as well as the ever-present but often unseen enemy. As difficult as those first three months were, McCarthy says it was a picnic compared to what would follow.

Recounting his first fourteen months in Vietnam in gripping detail, in this book McCarthy draws on his own memory as well as official records to provide an unflinching firsthand account of what it was like to serve—and lead—as a Marine during the Vietnam War.

Frank McCarthy spent thirty years in the Marine Corps, both active and reserve. His tenure included two combat tours in Vietnam as a platoon commander, company commander, or combined action company commander plus an additional tour with the Joint Casualty Resolution Center, searching for POWs and MIAs. During his service, he received three Bronze Stars for valor and two Purple Hearts for wounds received in combat, among other citations and awards.

Frank has been active in politics throughout his life and has served for six years in the New Hampshire House of Representatives. He lives in Conway, NH, with his wife, Terry, to whom he has been married for forty-two years. This is his first book.