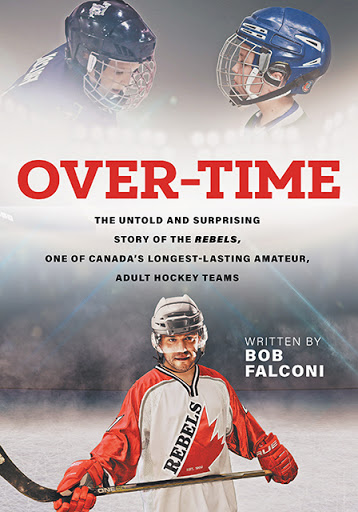 Over-Time
The untold and surprising story of the Rebels, One of Canada's longest-lasting amateur, adult hockey teams
by Bob Falconi

In today's sport's world, the modern day athlete has attained rock-star status. To those who are legends and well deserving of their status, we give accolades. All too often however, we hear about those who cheat, use illegal drugs or disrespect their fans, their teammates and the game itself. What is happening in the sports world? Does no one still play for the love of the game anymore?

Fortunately, the answer to that question is, "Yes."

There is a group of men in Canada, who in 2019 played hockey together for 50 years. They are one of Canada's oldest non-professional, affiliate or school team in Canadian history. While they do not get paid, there is no fanfare and they do not enjoy celebrity status, they have achieved a level of distinction in hockey that, in all likelihood, will never be attained again.

Ironically, they named themselves the Rebels, and they have blazed a path where no hockey team has gone before. Just for the love of the game.

The book follows their path and delves into the elements of their success. Most adult teams of this nature last an average of three years, so what drove these guys? What motivated them? What did they have that made them so special in Canada's game? How did they compete and continue to win year after year?

It's a magical story. If you are tired of the antics of some of the modern day athletes, this is a story that needs to be heard.

Bob Falconi, the author is one of the original Rebel team members and has been part of the team since 1969. He graduated from York University with a degree in English. Hockey was always a big part of his life, sharing the Canadian dream of making it to the NHL. Like most others, he never made it to the Pros but that never stopped him from playing the game he loved for over 50 years. "I was fortunate to be asked to play for the Rebels. Never in our wildest dreams, when we were eighteen years old, did we think we would still be playing together well into our sixties. This has been a great ride and a great journey. The dream of making it to the Pros was exciting but the camaraderie, friendships and life skills we developed perhaps were a bigger prize for all of us."