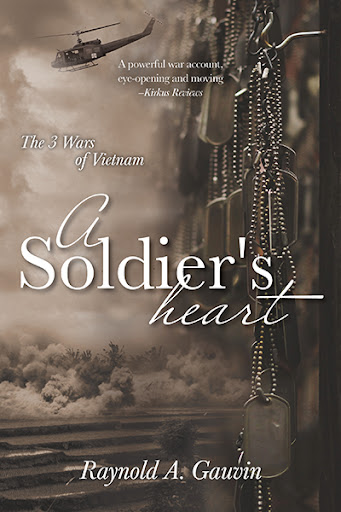 A Soldier's Heart
The 3 Wars of Vietnam
by Raynold A. Gauvin

A Soldier’s Heart is a moving and expansive memoir by Vietnam Veteran Ray Gauvin. The story takes us from the French Ghetto of Presque Isle, Maine, and the descendants of the Acadians, to military bases all over the country, and to Vietnam and back. Gauvin takes an unflinching look at life on the ground in Saigon and the horrors of the unusual and classified military posting of WDMET. The ingenuity and work ethic he built to help support his family as a kid got him through both the loss of his father and the war. But afterwards, pushing himself to the edge with striving and responsibility became a compulsion that staved off the nightmare.

Silent about the classified mission of WDMET, even to his family, Gauvin wrestled on his own with the effects of Agent Orange and Post Traumatic Stress Disorder. He became an entrepreneur, a businessman, and a philanthropist, but PTSD kept him embroiled in an internal battle between his obsession to work, his drive for success, a search for peace of mind, and thoughts of suicide. But after fifty years of running from the past, he turned about-face, and began the journey of remembering and healing.

This book is a must read for anyone seeking an inside look at one man’s road to Vietnam, and WDMET. It also gives incredible insight into the history of francophone communities in Northern Maine.

"Gauvin’s struggle is lucidly conveyed—he paints a painfully vivid picture of both the horrors of war and the grim consequences. And while the core of his book is a familiar one—there is no shortage of literature on either the Vietnam conflict or its aftermath—his discussion of his work for the WDMET distinguishes his contribution to the genre. For those in search of a different perspective on the ghastliness of that complex war, this memoir is an instructive and affecting remembrance.

Ray Gauvin is a Vietnam Veteran and prominent business and community leader in the State of Maine. He has a Bachelor’s degree in Accounting and Business Management. Born to a blended Canadian and American family of Acadian descent, Ray grew up navigating between speaking French at home and English at school. He learned later in life that he had also been battling with dyslexia. While in the army, he received the Army Commendation Medal and was recommended to receive the Bronze Star. Having lost his father at a young age, Gauvin discovered early that he had a talent for entrepreneurship. In 1984, he started the Center for Financial Planning and popularized the concept of financial planning in northern Maine. At one time, Gauvin owned franchises of Advantage Payroll Services in four New England states. He and his wife Sandy created the Gauvin Lighthouse Fund and the Gauvin Family Scholarship. Currently, they are co-founders of the Aroostook Aspirations Foundation, a nonprofit that helps first-generation students complete a college education and move into a successful career. They have two children and a grandson and live in northern Maine with their two dogs, Bo and Tucker.