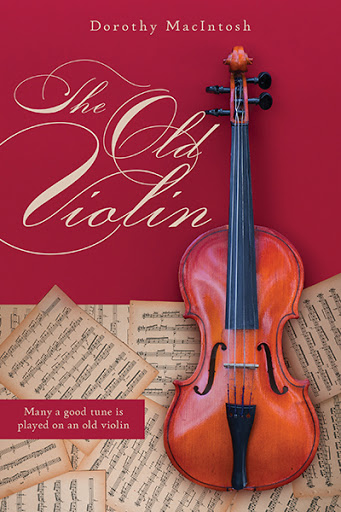 The Old Violin
by Dorothy MacIntosh

Alex Blair was a famous violinist in some of the greatest concert halls in the united States and Canada. Suddenly he removed himself from that life and lived almost as a recluse in the rural district of Guysborough County in Nova Scotia. He placed various notes about his life in his violin case which he left with his daughterin-law before his death. The notes were discovered by his great granddaughter – Ann Blair.

Ann was a highschool math teacher and the story unfolds as she finds the messages left in the old case. Some of the information she found was unknown to the family and they change the course of her life.

It is the story of the many twists and turns that can occur in several generations of family life and the impact they can have on the following generations. It is certain, many families can compare it with their own family history.

Life is unpredictable and each day can bring surprises – some good, some not so good. We have no control of that and are forced to live life as it presents itself. We must trust in God and hope for the best.

Dorothy A. MacIntosh is a retired teacher and taught all grades from primary to twelve, spending most of her career teaching senior high-school mathematics. Along with teaching math, she tried to instill in her students the importance of doing your best at whatever you choose to do. Everyone has a talent—something you can do better than the average person. Find your talent; it is likely to be the one thing you really like to do. Follow a path in that direction. Do not be afraid to ask for help and do not give up. Be persistent.

Dorothy was born in Pictou, Nova Scotia, and has lived in the area all her life. She and her husband, Jack, along with their twins, Larry and Linda, showed horses for many years (Hackney Ponies) throughout Canada and the United States, ending their horse showing days with a World Champion Hackney Pony.

Life has its joys and its sorrows. In 2010, Dorothy lost her husband, and in 2015, her daughter, both to cancer. Her interests outside the family include her church, the Rebekah Lodge and being a good friend and neighbour. The main joys in her life are her son and his family, son-in-law, grandchildren, and great-grandchildren. According to an old proverb, “Each generation will reap what the former generation has sown.”

Leave the next generation something to think about, even if it’s only a good laugh.