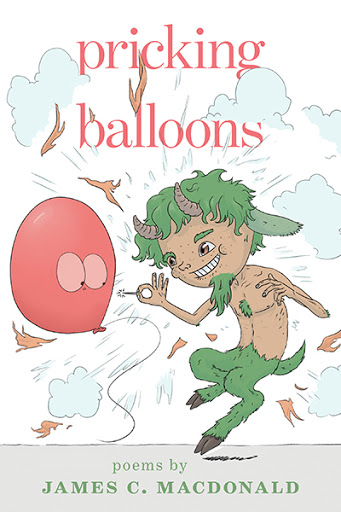 These poems transport the reader to an imaginative world resonating with mythological, spiritual, and existential significance. Here, with wit and irony, the poet challenges us to resist common assumptions with measured skepticism, and posits that ultimately, there is no comfort in conformity. We are both entertained and enlightened by a unique, poetic exploration of ordinary experience and the mysteries of life.

"I've been a fan of MacDonald's writings for a long while. PRICKING BALLOONS couldn't come at a better time. Some of us are at an age where life's mysteries begin to mean something or mean everything or exist somewhere in between. MacDonald's poems are rich in life, spirituality, innocence, darkness, comedy, and just plain living in this crazy world. 'Crescent City' showcases everyday America in present day love and violence. 'Obituary' gives a strange, beautiful glimpse of things never thought about when reading that section of the newspaper. 'Pricking Balloons' is hysterically funny because we were all kids once. My friend Stephen King would be smiling throughout 'The Devil'."

“Pricking Balloons abounds in clarifications. Even though it sometimes deals with big themes of freedom, fate, necessity, justice, contingency, selfhood, time, myth, poetics, and religion, it deals with them in the context of everyday perplexities.

Some poems forgo deep mythic resonances in favour of ordinary illuminations, such as a little girl in a mall or kids pricking balloons. The poet modestly says that his verse is ‘just imagination poking about.’ This is true, but poking about leads to digging down. And these poems dig down as they poke about.”

Literature and Language as Symbolic Action, Creating Legal Worlds, and many other academic publications.

James C. MacDonald was Professor and Associate Dean of English at Humber College in Toronto. He was educated at Waterloo Lutheran University and the University of Toronto. As editor, writer, and consultant, he has worked for many publishing companies, the Canadian Institute for the Administration of Justice, and government agencies such as CIDA and APEC. He has also published various articles on education and Canadian and British literature. He now spends his time in the Niagara Region and New Orleans.

Pricking Balloons has been nominated by our staff as one of their favorite books.