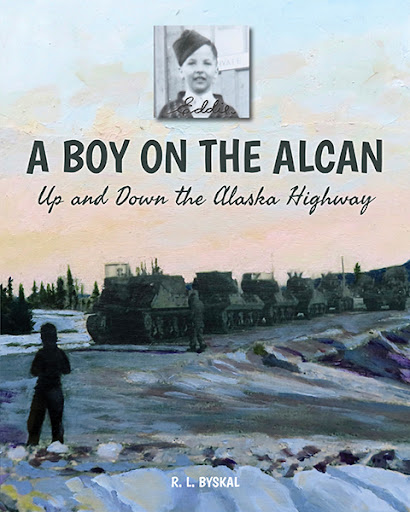 A Boy on the Alcan
Up and Down the Alaska Highway
by R. L. Byskal

A boy on the Alcan is an intriguing story of seven year old Eddie Byskal. He was born in a small Missions Hospital on the shore of Wakaw Lake, Saskatchewan, Canada.

When Eddie’s mother passed away his father signed up as a carpenter on the construction of the Alaska Highway. Eddie, his sister Annie and stepmother, travelled by train to the village of Dawson Creek, British Columbia. It was the termination of the railroad and Mile O of what was to become a highway 1400 miles long, carved through a vast, unmapped wilderness.

Eddie's parents were employed at camps along the highway. From 1943 to 1950 Eddie was moved multiple times to be cared for by others and often far from his parents. Attending school just happened when convenient.

As you turn the pages of the book follow the footsteps of a young boy who faced the unknown every day asking, “Where is my home? Where do I sleep tonight? To whom do I belong? Am I just a waif?"

At fourteen years of age and alone, Eddie considered his future and started on a path that could settle and establish him as a man with a purpose!

Ruth L. Byskal was a Northern girl born in Dawson Creek, British Columbia, December 13, 1935. Her father, W.O.Harper, was a true pioneer, a merchant, fur buyer and a friend of the settlers and aboriginal peoples in that rugged new land of the Peace River country.

Life was simple in that little town of 500 residents until in March of 1942 construction began on what became known as the Alcan Highway. Five Hundred residents became ten thousand and more, as soldiers, construction crews and labourers poured into town.

She saw the military police with their high leather boots and the billy clubs dangling from their belts as she sat playing on the wooden sidewalk. The crowds of men pushing their way into the narrow café doors and the noise of trucks and train always coming with more soldiers and tents and equipment. Merchants found it difficult to keep shelves filled. Those were exciting days and Dawson Creek was called “A boom town.”

And Ruth would see Eddie. He came from somewhere and left again. She would see him at the little gospel church or at the store. He was always going “up the Hi-way” or “up to this camp or that camp,” and they became friends.

In 1952, Ruth graduated from Grade 12 and became a legal stenographer with the firm of Carmichael & Dodd, Barristers & Solicitors and continued in that position until she and Eddie were married on May 26, 1954.