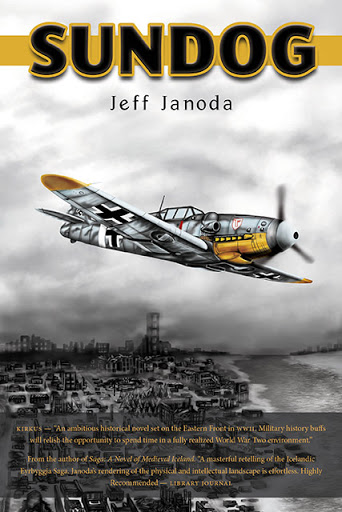 When two German fighter pilots are flung into the terrible siege of Stalingrad during the Second World War, they discover that the conflict in the air is as fierce as in the frozen streets below. These young men must somehow survive long enough to learn the skills of air combat so that they can challenge their powerful enemy and protect those they have come to love and respect.

As madness threatens to overtake one of the traumatized pilots, they try every tactic to overcome the bitter odds trapping their comrades in the Stalingrad pocket. A story of determination and the discovery of personal strength, Sundog shows the importance of duty and loyalty and friendship at a time when the entire world had turned to war.

Kirkus- "An ambitious historical novel set on the Eastern Front in WWII. Military history buffs will relish the opportunity to spend time in a fully realized World War Two environment."

From the author of Saga: A Novel of Medieval Iceland. "A masterful retelling of the Icelandic Eyrbyggja Saga. Janoda's rendering of the physical and intellectual landscape is effortless. Highly Recommended - Library Journal

Praise for Saga: A Novel of Medieval Iceland by Jeff Janoda

"As focused as Jane Austen, as macabre as Stephen King, Jeff Janoda traces out the hidden springs of power in the micro-society of an Icelandic fjord. He tells a tale of complex feud with all the fullness and detail of a modern novel, but leaves its violent and treacherous heroes as enigmatic as before. A brilliant blend of scholarship and insight." -Thomas Shippey, author of J.R.R Tolkien: Author of the Century.

"An absorbing historical melodrama. The intricate but well-paced narrative moves grimly forward, brimming with multi-generational cycles of bloodshed and vengeance set against a backdrop of ghostly apparitions and elvish malevolence that symbolize the dark, tectonic forces of human greed and rage. A gripping re-creation of an ancient genre." -Kirkus