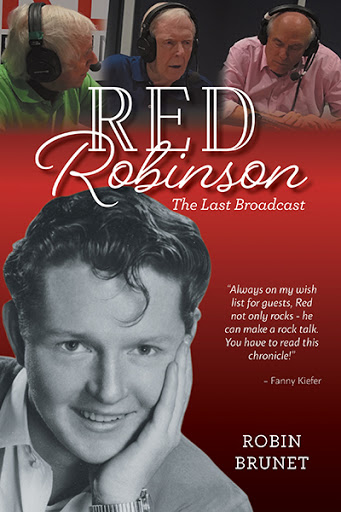 Red Robinson: The Last Broadcast is the sequel to the best-selling Red Robinson: The Last Deejay. It details the legendary Canadian deejay’s last radio broadcast in the summer of 2017, and provides an in-depth look at the careers of his equally colourful friends and colleagues in the broadcasting industry. Over a career that spanned six decades, Red’s colleagues include Doc Harris, Stirling Faux, Fanny Kiefer, Gloria Macarenko, Wayne Cox, and many others. Robinson was the first DJ to play rock ‘n roll regularly in Canada. He also emceed live concerts by Elvis Presley and the Beatles. With humour and candour, Red Robinson: The Last Broadcast explores why the old days of working in radio were far more fun, daring, and innovative than in today’s environment of media concentration. This blast from the past will entertain readers both old and young and give an emerging generation of broadcasters a sense of why theirs is a profession worth preserving through stubborn persistence, endless curiosity, a dash of hubris, and a strong dose of old-fashioned chutzpah.

“Always on my wish list for guests, Red not only rocks - he can make a rock talk. You have to read this chronicle!” – Fanny Kiefer

“Robin caught the excitement and drama of an era that has been torpedoed by expensively-suited bozos of the corporations that now own most of the radio stations. Radio was great! It was heaven, I tells ya!” – Doc Harris

“Take a trip back to a time when radio was Exciting, Entertaining and Fun.  The good old days really were good!” – Wayne Cox

Veteran journalist and author Robin Brunet has been chronicling Canada and Canadians for over 35 years. He is the author of Red Robinson: The Last Deejay (Harbour Publishing, 2016); Let’s Get Frank (Douglas & McIntyre, 2018), the biography of Canadian advertising legend Frank Palmer; and has been published in over one hundred magazines in Canada and the US. He lives on a farm in Langley, B.C. with his wife, Wendy, and his horse, Razado. He is currently at work on his next book.

Red Robinson: The Last Broadcast has been nominated by our staff as one of their favorite books.