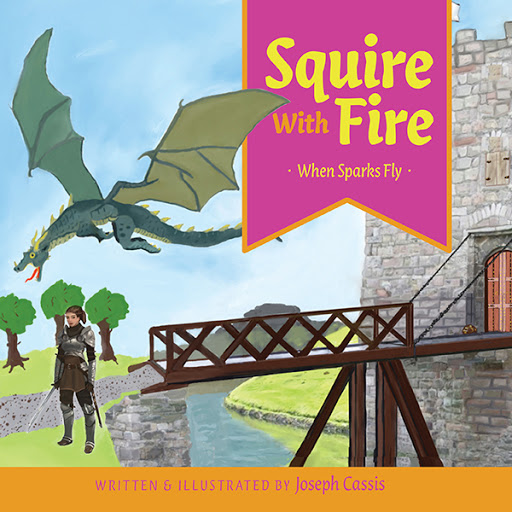 Squire With Fire
When Sparks Fly by Joseph Cassis

Squire with Fire – When Sparks Fly is a follow-up to the award-winning Squire with Fire – A Happy Dragon’s Tale. This second tale is an equally fantastic romp through legendary times. With similar myths and magic, the story is cozily told by a grandfather imparting heritage lessons to his grandchild, Mackenzie.

A mysterious old wooden chest containing several family mementoes inspires Grandpa and Mackenzie to explore the amazing story these relics exemplify about their ancestor, also named Mackenzie. Squire Mackenzie uses these antiquities, marbles, and cherts to fight Vikings invading their castle. She works with Spitfire, a friendly dragon who she helped save, to cleverly thwart these invaders. However, when Spitfire is injured, another caring dragon named Sparky happens to see Spitfire suffering on the ground. She works with the villagers to mend his wound and then the two dragons join forces to help Squire Mackenzie prevail over the invaders with fire and cunning actions.

By sharing this enchanting story, Grandpa connects Mackenzie to her past, teaches her the importance of being understanding, practice skills to be the best and have persistence to achieve goals.

Joseph Cassis launched the Squire with Fire series to fulfill a promise he had made to his daughter, Mallory, when she was a two-year-old to write her a book about knights and dragons. Though he did not fulfill his promise until Mallory became an adult with Isla, her own daughter, he successfully authored the series providing them with a memorable legacy.

Joseph has a diversified professional background which include restaurants, marketing, information technology and telecommunications as well as being avid life-long learner with a passion for unique historical stories. He participated in the renowned University of Iowa’s Writers’ Workshop program and has written three screenplays, one of which was optioned in Hollywood. Joseph resides in Johnston, Iowa with his wife, Joyce, and their Labrador Retriever, Carmella.