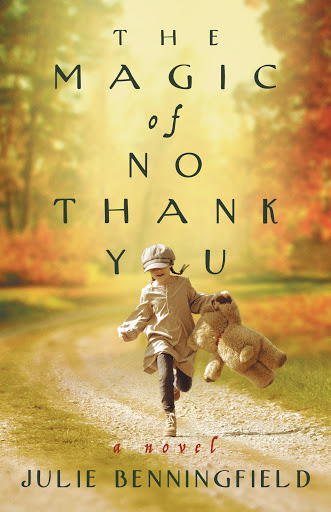 The Magic of No Thank You
by Julie Benningfield

On the verge of returning to the wearisome job he had never wanted, David discovers that he must earn his doctor’s medical release by spending six weeks at a Vermont wedding venue. He is stunned when he discovers that it is run by his former fiancée, Callie, the only woman he ever loved.

Callie had mysteriously vanished twenty four years earlier just before they were to be married, crushing David’s only dream, marriage and family with Callie. In this bittersweet reunion, David discovers the truth about Callie’s disappearance and realizes he must seize control of his life from Myra, his scheming and manipulative mother, who forced him to marry Jane and follow her choice of career.

When Myra senses that her influence over David is being threatened, she intensifies her ongoing harassment of Jane attempting to lure David home from Vermont. Desperate for a future with Callie, David must now protect Jane from his unhinged mother and determine whether or not there will ever be a place for him in Callie’s current life.

I began writing unexpectedly one summer when my two young sons were out of town. This was back in the days when snail mail contained more things you wanted to read than shred. I wanted to write to them every day, but interesting daily news was in short supply and not likely to create entertaining letters for two young boys.

However they had left behind ten mischievous teddy bears who were very excited about a summer without supervision. There was never a dull moment once the bears, fueled by curiosity and imagination, explored the outside world. It didn’t take long before one predicament after another spun a story which unfolded, letter by letter.

It started with Bo, a ten inch bear whose legs that were wider than they were long. She dreamed of being a ballerina. Bo went on a diet hoping for the slender legs of a graceful dancer. The diet made her grouchy. To cheer her up, her brother Jacques made her cookies. Bo told Jacques that his cookies had too many calories in them and slammed the door in his face.

Jacques was hurt and confused. His cookies had always made Bo happy. He studied his recipe carefully. He had made them with sugar, flour, chocolate chips, and butter, but not one calorie. Jacques wrote to Tim and Jamie asking for advice. He even got a letter in return.

On behalf of the bears, I wrote five letters every Sunday and mailed one each day. After the summertime bear letters, I took a class in Writing for Children and Teenagers at the Institute of Children’s Literature. I loved it and my instructor told me that some of my assignments were publishable. I was grateful the compliment but I had worked with computers my entire career and it was hard to visualize the leap from programmer to writer.

After I retired from the technical world, I felt inspired to write again. It was an unexpected source of joy and remains so as I continue to write.