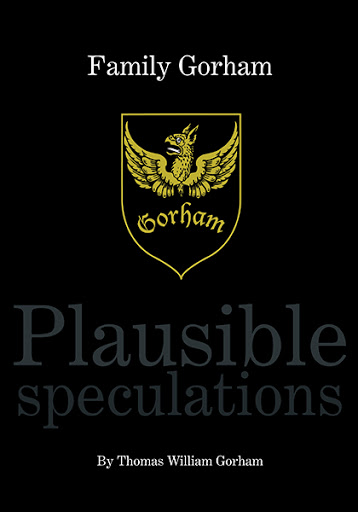 Family Gorham Plausible Speculations is an historical genealogical record of the Family Gorham, which includes a lineage of emperors, nobles, crusaders and clergy from early medieval times to everyday people in contemporary North America. It begins in mid-eighth-century France with Charlemagne through his daughter Rotrude. From there, the story tracks thirty-six generations, all the way to the author’s son Trevor, living in twenty-first-century Canada. Along the way, the reader is treated to tales of medieval nobility and the evolution of the Family Gorham name in northwestern France in Brittany, Maine and Normandy until the eleventh-century migration to Leicester, Hertford, and Northampton, England. The book recounts events in contemporary chronicles because nobility records are fragmentary and rarely place them in their family context. Mainly, they were documented on grants and charters to religious houses of the day.

Rather than repeat or reproduce old information, Family Gorham Plausible Speculations employs a methodology that combines historical birth, marriage and death records with existing evidence from newly researched primary sources. The result is a genealogical thread of the author’s ancestry that features special relationships and strong plausible speculation about the lives of this once-flourishing extraordinary Family Gorham, its variants and pedigree. From a 1513 will of a Richard Gorram in Glapthorn, England, for example, we learn that three major branches of the family—the United States, St Neots, England, and the Canadian branches—derived from two sons of Richard, both named John.

"Books about individual family histories can often be sprawling and indigestible for the reader. Thomas William Gorham, author of Family Gorham Plausible Speculations, avoids this trap by presenting the evidence of his ancestral family in a notably concise and clear manner. The work’s clarity is aided by an attractive layout incorporating a good range of illustrations.

"The book’s reach is ambitious, with the chronological coverage stretching from early medieval times to the present, and the locations ranging from continental Europe to England, and then on to North America and Canada. The subtitle ‘Plausible Speculations’ sounds the key note of caution that must accompany such ambition; and, in a very helpful preface, the author discusses how his interpretations must be qualified by the limitations of the surviving documentary evidence. All too often, enthusiastic family historians don’t realise that such caution in historical research is a strength, not a weakness. Wherever possible, original source material has been tracked down; this is discussed and cited in an admirable way, firmly grounding the author’s interpretations about his fascinating ancestral story in the records."

"I very much like the way the author Thomas William Gorham has put Family Gorham Pausibile Speculations together, and especially like the fact that reference notes are added all the way through so the reader can tell where the evidence could be found- WELL DONE."

"Family Gorham Plausibile Speculations is beautifully researched, presented and written. Well worth the price. This is a treasure for my granddaughter to cherish as part of her coming to know she is part of a long line of people who made a difference in this world. So grateful Thomas William Gorham."

"Family Gorham Plausible Explanations has the feel of a country’s constitution, a short condensed document, with a library of pertinent scholarship behind it. So good that Thomas William Gorham stuck with it and brought the Book to press."

Thomas Gorham was born in Niagara Falls, Canada, and raised in nearby Niagara-on-the-Lake. Thomas is a university graduate with over thirty years’ experience in business development and marketing. He has had a passionate enthusiasm for the last thirty plus years in the research and history of the Gorham family genealogy. Thomas also has an antique collection that includes canes, walking sticks and various period pieces. As well, Thomas is passionate about the effects of excessive carbon being released into the atmosphere affecting the Earth’s climate. He has a desire to contribute to the weight of informed solutions aimed at reversing this change to Mother Earth for future generations. His political interests led him to manage various municipal campaigns that ultimately steered him to be the head of two federal campaigns for local candidates.