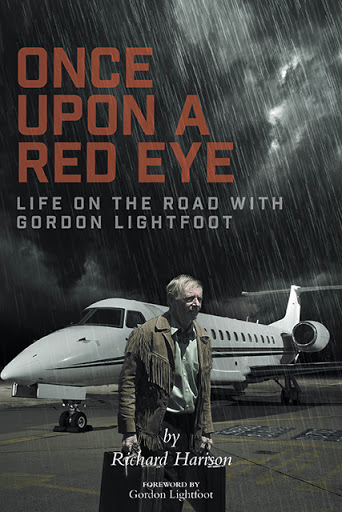 Once Upon a Red Eye is a compelling memoir that offers rare insight into the behind-the-scenes life of a Canadian musical icon. Here are the colourful recountings of Richard Harison, who spent a dozen years serving as Gordon Lightfoot’s road/stage manager, concert sound engineer, and lighting designer/director. In the time of his employ with Lightfoot, Harison enjoyed all manner of adventure. He accompanied the famed singer/songwriter and his band on concert tours of the world, celebrity meetings, thrilling performances in halls grand and small, and travel mishaps, including three bomb scares and two consecutive aircraft engine failures.Woven expertly into the background of Harison’s stories of music, tours and elaborate pranks, history plays out in iconic bursts. The Vietnam War, an encounter with the Black Panthers, and a UK tour during the serious political/religious upheaval in Ireland all provide context to Lightfoot’s international presence in this epic stretch of time.

Between 1970 and 1981, Richard Harison was part of Lightfoot’s remarkable story, serving as a source of friendship, personal, and practical support for Lightfoot and basking in his special glow.

Richard Harison was a worthy and very capable road manager for me and my band throughout the seventies.  Together with Rick Haynes, Red Shea, Terry Clements, Barry Keane and Peewee Charles we toured all over Canada, the United States, the UK and Europe.  And believe me, Richard has many interesting memories of untold stories to convey in this very thorough account of life on the road.                                         — Gordon Lightfoot

Once Upon a Red Eye by Richard Harison is a fascinating behind the scenes account of a young man's journey through the Folk Music movement of the 1960s. He struck up a friendship with Joan Baez, was a roadie for the Byrds and eventually landed the position as road manager for Gordon Lightfoot which he has maintained for many years. You will hear his reaction to Bob Dylan going electric at the Newport Folk Festival in 1965 and follow him through many exciting and mysterious adventures.

— Roger McGuinn (Leader of the Byrds)

I cannot wait to read Richard Harison’s book about his years on the road with our iconic superstar, Gordon Lightfoot. As Gord’s long time tour manager, Richard was given a unique window through which he witnessed all the fascinating, stressful, and at times crazy situations going on behind the scenes with the man who sold out concert halls and stadiums in the 70’s and is still doing so. Having been part of his North American tours for over four years as Gordon’s “opening act”, and having written about the various strange and wonderful experiences in my own autobiography, I’m sure Richard’s account of Canada’s legendary and beloved singer/songwriter will make for a most intriguing read. This is a book that I shall have a hard time putting down.”

Gordon Lightfoot has toured the world-over. There are millions of people who know who he is through his music and travels but only a handful really know the man. Gordon’s long time road manager Richard Harison is of the latter. You might say he has the inside scoop. If there are stories to be told about this legendary songwriter and entertainer, Richard should be the one to tell them.

In 1974, Gordon Lightfoot ascended to the top of Billboard's album and single charts with his song “Sundown,” displacing even Paul McCartney.

Set in the socially and politically charged days of the 60's and 70's, Lightfoot's right hand man was none other than Richard Harison. Get a backstage pass when Lightfoot performed as part of Bob Dylan's Rolling Thunder Revue. With that same pass, follow Lightfoot on tour throughout North America, the UK and Europe, as well as in the studio.

Being such a close up, personal witness to events involving one of the great singer-songwriters of our time at the height of his powers, “Once Upon A Red Eye” takes you on a journey that can only be revealed from Richard's unique position and perspective. You will be riveted by Richard's meticulously woven accounts of life inside the orbit of Gordon Lightfoot!

As long-time tour manager for the iconic Canadian singer/songwriter, Gordon Lightfoot, Richard Harison has a unique perspective of life on the road with Gordon during the 70’s.

These authorized stories could only be told by someone who was there for all of it, and Richard is certainly the one to share his up close and personal accounts with all Lightfoot admirers.

A respectful and inside glimpse of Gordon Lightfoot and his band that fans have never seen.

Richard Harison was just a young man from California looking for his path when his close association with the Byrds led to a longtime gig with an emerging Canadian musician named Gordon Lightfoot. Harison spent twelve years as an integral member of a crew dedicated to showcasing the talents of this exceptional musician.

Today, Harison lives on a hill overlooking Georgian Bay, in Ontario, Canada, with his wife of 25 years and a headful of memories of those magical times.

Once Upon a Red Eye has been nominated by our staff as one of their favorite books.