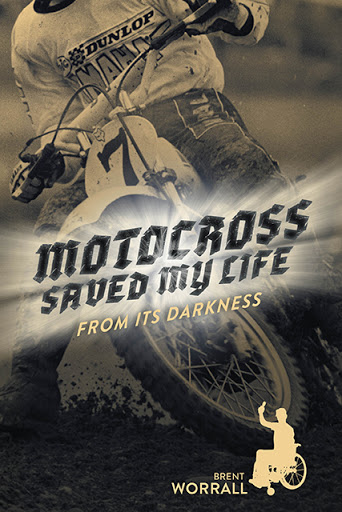 Motocross Saved My Life
From Its Darkness
by Brent Worrall

In 2011, former Canadian national champion motocross racer Brent (Airmail) Worrall, who had recently returned to the sport after a lengthy absence due to struggles with alcohol, gambling, and depression, was again in a fight to save his own life. His shot at redemption and making peace with the sport he loves was cut short by a near-fatal crash. A mechanical malfunction in mid-flight over the track’s largest jump sent him spiralling into a nose dive. He had just enough time while airborne to say, “Survive, survive, survive.”

He broke his back and neck in six places, fractured his clavicle, sternum, and multiple ribs and collapsed his lungs. After flat-lining on the operating table four times, Brent’s doctors finally managed to stabilize him. He required two blood transfusions, and his doctors feared the worst. He emerged from hospital a paraplegic, given only five to ten years to live due to various complications from his accident.

After losing the sport he loved many years before to the seedy underworld of depression, alcoholism, drugs, and compulsive gambling, he vowed never to let go of his lifeline passion again. Brent meticulously takes us through his troubled journey to the eventual promised land where he now sits. Along the way, he recounts his many inspirational interactions with those who helped mould his character, including Rick Hansen on his Man in Motion tour as well as looking into Terry Fox’s eyes on his Marathon of Hope. In keeping with his character as an avid sports and history enthusiast, Brent takes us back through many pertinent historical events that shaped his life and society as a whole.

Two years after his accident, Brent was back at the track, this time to announce races rather than participate in them. Shortly after that, he launched the Canadian Moto Show, a live online talk-radio show, as well as a magazine, with his good friend Kevin Lefebvre. Throughout the process of giving back to the motocross community while also reinventing himself, he maintained a position as a senior writer at Motocross Performance Magazine. In 2016, he was nominated for a Coast Mental Health Courage to Come Back award. He continues to reshape his life within the sport he loves, refusing to let any of the formidable obstacles he has faced slow him down.

This book is Brent’s firsthand account of his journey, written in all five senses, with the hope that his story will motivate and inspire others to see that any seemingly insurmountable obstacles can be overcome.

"What a powerful story and legacy...Aspiring

to achieve one’s full potential through sport, regardless what form life’s challenges might take. This is Paralympism - and this is Brent.”

“Over the course of the 40 plus years that I’ve spent hanging around the sport of the motocross, very few people have inspired me the way Brent Worrall has.”

He collected many colourful achievements in his younger years, including being nominated for his hometown’s athlete of the year, along with finishing tenth in the world motocross championship for his age group. He spent many dark years in places that he is not proud of and credits many of his painful life lessons to his current resolve. He hosted the Canadian Moto Show for four years while reinventing his life following his spinal cord injuries. Throughout this process, he also maintained a position as a senior writer at Motocross Performance Magazine. In 2017, he shut down everything to write this book as a final gift to the motocross community. He currently devotes his life to a number of causes and activities, all of which are aimed at sharing his love of sports and motocross while also encouraging anyone who is facing adversity that it is never too late to turn your life around and make it count. He currently lives in Vernon, BC.

Motocross Saved My Life has been nominated by our staff as one of their favorite books.