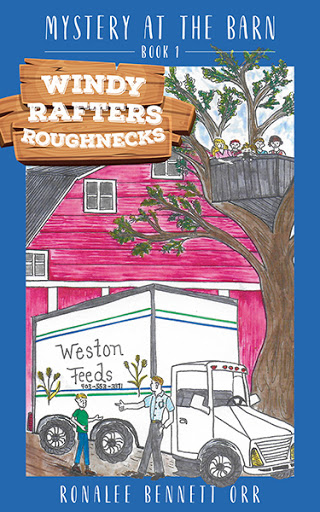 Strange things have been happening at Windy Rafters resort. Mellie Stevens is indignant that the shadow of blame falls repeatedly on herself, her sister, and their younger cousins. To clear their names, the six cousins organize themselves as the Windy Rafters Roughnecks.

Working out of the old treehouse in the farmyard, the Ferris cousins investigate suspects and, in the process, make some unlikely friends, and discover some great neighbours.

Just when they think they have the mystery solved, the younger kids are transported back in time to the days before their family owned the Windy Rafters land. Both the Blackfoot people the younger cousins meet and their experiences in the past will prove invaluable when a big Californian company offers to buy out the resort and solve the family’s money problems for good.

Ronalee Bennett Orr was a public educator for 25 years, teaching children in rural southern Alberta from grades K–9. She spent most of that time teaching many Blackfoot students from the neighbouring Piikani and Blood Reserves. In the 14 years prior to her retirement, she also worked as a school administrator. During the last 3 years of her career, she supervised Hutterite students attending twelve different Hutterite Colony Schools in her school district. Since retirement, Ronalee has continued to support public education through her work with the Alberta Colony Educators.

Like Grandma Rachel in the Windy Rafters book, she enjoys hosting events and cooking for crowds. She was born and raised on a farm in southern Alberta and has lived at the real Windy Rafters farm for 38 years with her husband. Two of their daughters and their families also live on the farm, including five of their eight grandchildren. Among their three families at the farm they have numerous cats, dogs, chickens, pigs, turkeys, ducks, and goats, as well as a big garden. There is never a dull moment!