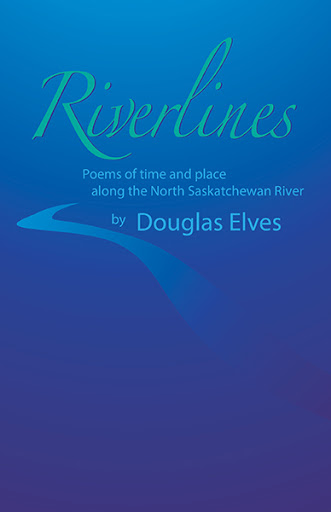 Ranging from midstream to far watershed,

the Saskatchewan Glacier to Cumberland House and beyond, his poems are of those who have lived and worked on or near this river:

the coal-miner fishing in the foothills stream;

the little girl roller-skating in a hotel above the river;

and so many more.

While most poems here are ‘riverlines,’ this book includes others, including some written in youth.

For many years Edmonton poet Douglas Elves has lived literally within a stone's throw of the North Saskatchewan River. He has written poems ever since his teen years; and like all poets, he has had to live by other endeavours; but he has always prepared the way for his poetry. In university he studied Classics and literature and languages, but left the study of 'creative writing' to his own private curriculum rather than to any imposed norms or trends.

His experience in many community and arts organizations, as well as in the labour movement, allowed him to convene the founding committee of the Edmonton Stroll of Poets Society, a democratic society in which he served as treasurer for many years.

He seeks to honour not only the traditions of poetry, but also the people of all backgrounds who have lived and worked near the river and within its watershed.