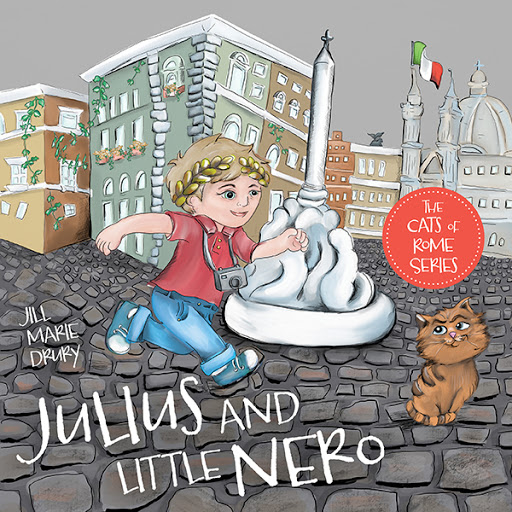 Rome is a city of Eternal imagination. It has an amazing culture combining new and ancient sites to visit and absorb. It is a city where meals are worth daydreaming over and unexpected adventure awaits around every cobblestone corner. Exploring the City of the Seven Hills on foot can be an exhausting experience but a magical one like no other. As the sun sets every evening on the Sacred City, it is easy to find yourself on marble steps with a scoop of gelato reflecting over what it would be like to roam the Empire's streets.

Julius and Little Nero is a whimsical story about a boy on a Roman daydream. Tired from exploring the city sites, Julius stops to rest at the base of the Spanish Steps. Just as he is about to give up on his day of adventure, he comes across a golden stray cat named Little Nero. Together they pair up and and go on a thrilling Eternal City adventure. From ancient sites, crowded streets and Hilltops, this is a story about imagination and youthful energy. Rome may have not been built in a day, yet creativity, bravery and leadership are timeless strengths that empowered the Empire everyday.

Jill Drury developed a love for travel with her history-loving husband, John. Together they would save up money to take adventures around the world to places they daydreamed about while in school. From Easter Island visiting ancient Moai to bungee jumping off Kawarau Bridge in New Zealand, John and Jill hoped to experience the world and absorb its diversity.

Rome and the wonders of Italy remain high on John and Jill's top travel adventures. Being able to experience wonders in person that many only read about in history books leaves a deep impression. Plus, gelato and pasta tend to tug at your heartstrings!

In 2015, John and Jill welcomed John Jr. into their Empire. Story time exploring the cobblestone streets of Rome is a popular bedtime request...