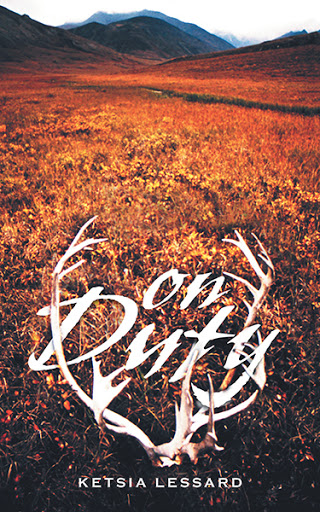 On Duty
by Ketsia Lessard

When a deathbed confession leads RCMP Constable Jasper Nelson to discover the existence of his illegitimate sister, his curiosity is piqued and he sets out to find her. He locates the young woman a year later where he least expects to, within the police force itself. Raised by an Inuvialuit family and recruited as a community officer in the Northwest Territories, Nelson's sibling Heidi Finlay has experienced a life quite unlike his own.

As the geographical distance separating them becomes unbearable, Nelson obtains a transfer from Vancouver to the Inuvik detachment where he partners with the hardy Finlay to investigate criminal activity and trauma in the High Arctic. From bootlegging to child abuse, missing Aboriginal women to suicide epidemics, the two officers come to uncover corruption in the RCMP and examine their role as the "White Man" in a culture still reeling from the devastating impacts of the residential school system.

Inspired by actual events, On Duty is a series of cases narrated by the constables themselves; through Nelson's refined prose and Finlay's no-nonsense reporting, a portrait of human nature emerges, emphasizing the possibility—and need—for divine redemption.

Ketsia Lessard was born and raised in Montreal, Quebec and graduated from the University of Quebec with a creative writing degree. Still living in Montreal today, she has travelled throughout Canada and done extensive research to help her understand the Canadian identity and the symbols that best define it.

Although French is her first language, Ketsia deftly writes in English to bring her characters and the Northern setting she favours to life. She has long had an interest in Inuit culture and has spent years exploring their history and the RCMP's work in the Arctic. She credits her close bond with her older brother as another inspiration for On Duty, which is her first book. Ketsia Lessard is also a painter and a church musician.