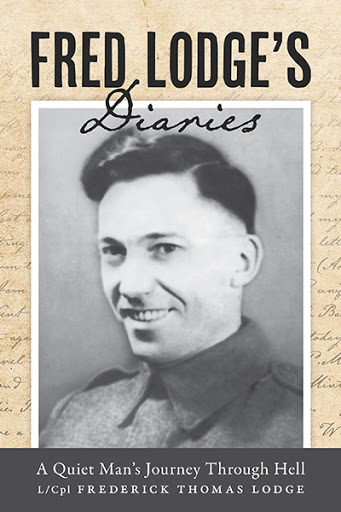 The wartime diaries of Fred Lodge underscore his perilous passage through World War 2 including the Dieppe Raid and three years as a POW in Germany. Fred was a quiet, kind, considerate and courageous young Canadian who trained in Canada as an infantry soldier; practiced his military skills in England; waded onshore at Pourville, France on August 19th, 1942; survived intense German gunfire; saw his buddies killed, maimed, indeed slaughtered. Somehow he survived that awful day at Dieppe and was transported to Stalag VIIIB and later to Stalag IIC in eastern Germany. As a POW he was often hungry, bored, shamed, shackled, witnessed summary executions and was forced to participate in a death march in early, 1945. Through it all Fred Lodge was courageous and true to his beliefs no matter what obstacles, temptations or mistreatment came his way. He always did his best and the "right" thing. Fred didn't hate Germans although he had no respect for inhumane NAZI zealots. With the Russian Army fast approaching, Canadian POWs were evacuated westwards in January,1945 in bone-chilling cold and snow. Over four months they were marched west with little food, no warm clothing, little shelter and no reason to think they might survive. However, Fred and most of his fellow POWs did survive and in late April, 1945 they were liberated and returned to England. Somehow Fred Lodge remained the same quiet, kind, considerate and courageous man he was at the beginning. This story, as told by Fred Lodge himself, is a gripping tale. He passed through the hell of war and emerged whole, could you do the same?

Frederick Thomas Lodge was born in Kenora, Ontario, in January 1913, the ninth and final child of poor English immigrants. His father and brother both served in the Canadian Army overseas during World War One and his brother, Bill, was killed in action in 1917. Fred Lodge grew up a skilled outdoors-man, often listening to stories about Army life and the courage and sacrifice of his brother. Fred enlisted in 1940 as an infantryman in the Queen’s Own Cameron Highlanders of Canada. He experienced the best and the worst of wartime service, surviving the disastrous 1942 Dieppe Raid and three years as a prisoner of war. After the war, Fred returned to Canada, married and raised three children while living out his life in Kenora. Fred Lodge died in June, 1976, a man proud of his family and military service.