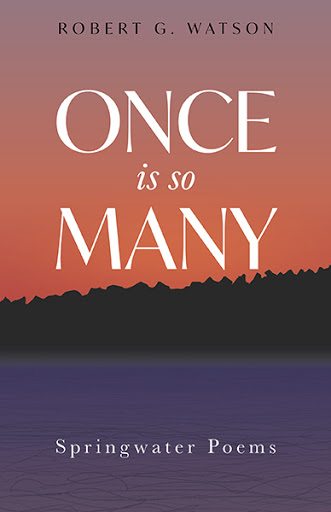 Once is so Many
Springwater Poems
by Robert G. Watson

This collection of spiritual poems derives mostly from the author’s years of meditation work. The result is a series of thoughtful, meditative, poetic bursts that draw on the natural world, emotion, and what it means to be in the present moment. There is magic and curiosity to found in this work, and an ever-present appreciation for the moment.

There are poems and prose poems in this collection, and a great variety of subject matter. Taken as a whole, the poems in Once is so Many encourage the reader to see with his inner eye, and to understand the world beyond language. Sometimes there is rhyme or alliteration, but this happens on its own and is never sought out.

Beautiful, evocative poems by an old friend. In my years on staff at Springwater Center, it was always a special treat whenever Robert showed up for a retreat. His quiet, deeply awake, subtle presence is here in these poems.

—Joan Tollifson, author of Bare-Bones Meditation and Nothing to Grasp.

The second last line in the last poem, "We are One, or none," comes from a talk given by Toni many years ago, and must be acknowledged.

She only rarely spoke with such authority.

Mr. Watson has spent some forty years engaged in meditation work, attending sesshin (intense meditation retreats) at the Montreal Zen Center, where he received guidance from Albert Low, and retreats at the Springwater Center for Retreats and Meditative Inquiry, where he worked for many years with Toni Packer; since her death in 2013, he has been working with Stephan Bielfeldt. Throughout, he has come to understand that meditation does not take place only when one is actively engaged in practice, seated on the mat or in retreat, but that there is a mystery that can present itself any time. And sometimes, understanding, or a moment of insight, can find expression in a text or a poem.

The author lives in a beautiful, century-old brick house filled with art and books and music, in the centre of Ottawa. Always present in his life are cats, the most delightful, capricious and graceful of all creatures. He works still as a conference interpreter, in English and French, and spends his evenings at the gym or in concert halls.