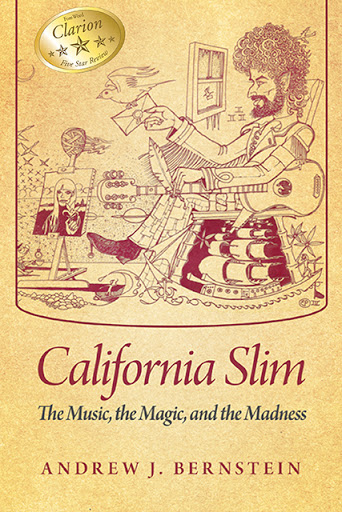 California Slim
The Music, The Magic and The Madness by Andrew J. Bernstein

to far more than that—and achieves it. Andy was there, at the onset of the post-’50s

revolution that, as a beat poet once put it, roared as it ripped the threadbare fabric

of an age. Andy was no distant, casual observer during the tumultuous ’60s and

’70s; he was at the heart of the maelstrom, and writes about it with candor, humor,

The story begins, for God’s sake, with Andy and his then unknown banjo teacher,

a young Jerry Garcia, fingerpicking in a back room at Dana Morgan’s Music Studio

in Palo Alto in 1962. A skinny six-foot-seven-inch Jewish kid (later known as “California

Slim”), Andy divided his time between the usual adolescent interests and

music, for which he would go on to provide a capital M by promoting and staging

Warehouse, across the street from the Stanford University campus, brought revolutionary

musicians (among them, Sonny Terry and Brownie McGhee) to young

Willie Nelson and his Family—which felt, Andy said, “like reading a really good

book that I couldn’t put down.” That feeling led directly, if gradually, to California

Slim. And you, dear reader, won’t be able to put it down, either.

When I read California Slim, what struck me most was the level of intimacy I felt—not only with the characters, but with the time: 1960 to 1980. Throughout the entire manuscript, I found myself smiling and oft en outright laughing aloud, for there is a dry and wicked sense of humor operating here that’s delivered at the most unexpected moments. Aside from the sex, drugs, and rock ’n’ roll, there is a story on these pages of a teenage boy trying to make his way into manhood. It’s very sparing, subtle, and indirect, but it gave me such an insight into what it must be like to become a man. Even though there are celebrities and well-known musicians in this book, California Slim is Andrew’s memoir through and through—an extraordinary coming-of-age memoir in an unbelievable time.

Andrew J. Bernstein was born in San Francisco and then raised in Palo Alto from the age of three. As a college student, he studied English and Multimedia, but his heart was really in music, social causes, and all the opportunities afforded by the San Francisco Music and Cultural Revolution. They say that if you remember the ’60s, you weren’t there! Thank god, Bernstein took notes.