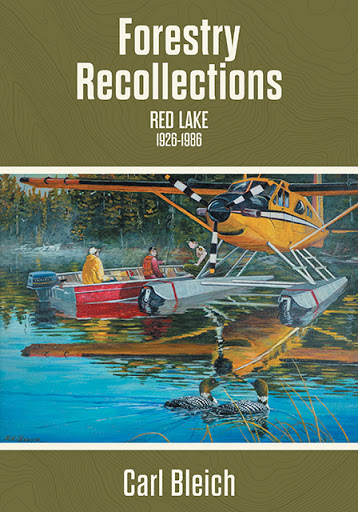 In 1925, a gold rush exploded in this isolated area of northwestern Ontario. A surge of gold seekers hastened to get to Red Lake. With people flooding in, the provincial government decided to establish a presence. In 1926, the Department of Lands and Forests, Ontario Forestry Branch, set up bases throughout the region. This historic book is produced through research mainly via a series of recollections from those who worked for the “Forestry” from 1926 to 1986. The stories are from forest firefighters, pilots, technicians, supervisors, conservation officers, parks workers, junior rangers and a safety officer. Anyone who has visited or lived in this area will gain an appreciation of the history.

Carl Bleich moved to northwestern Ontario in 1972, first employed by the community of Ear Falls. Following this, he worked for the Ministry of Natural Resources (MNR) in the Red Lake District, for ten years.

He held various positions, starting with junior ranger foreman, parks worker, park warden, fire warden, auxiliary firefighter, fire safety officer, crash fire rescue team leader and district safety officer. He is well known in the region, where he lived off-grid for seven years at Pakwash Lake. With a dog team or canoe, he commuted to work at the park or to his vehicle. Previous to working with MNR, and on winter breaks, Carl published a small-town newspaper, the Ear Falls Echo and worked one winter as a reporter /photographer for the Meaford Express. This led to an assignment to write a history of Forestry Point in Red Lake, where the old buildings were to be torn down and a new fire operation complex constructed. That assignment turned into an eight-page tabloid, published in 1986. After Carl’s retirement, in 2010, with unpublished stories from Lands and Forests, he returned to this project. He interviewed close to one hundred MNR employees. These stories expanded into this book, not just of Forestry Point, but a variety of MNR jobs within the Red Lake District.

Carl married Mary Catherine Smith in 1977 and they have two sons. Chris is a geologist and Erik is a singer, songwriter and musician.