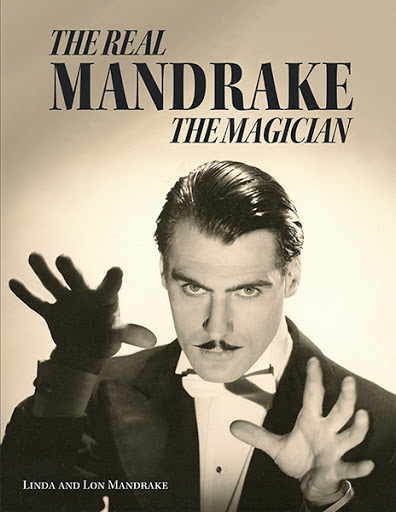 The Real Mandrake the Magician
by Linda Mandrake and Lon Mandrake

This biography not only gives you an idea of the brilliant career of Mandrake with over 100 show photos, but also provides a glimpse behind the scenes. What was it like to live on the road with small children while constantly performing magic shows?

Mandrake's first son, Lon, at age 6 attended five different schools in grade one yet graduated from U.B.C. with a Bachelor of Science degree years later.

Mandrake's performing partner and wife, Velvet, remembers: "One night we had a big show, with full orchestra and a packed house. At the end , the audience really liked us and they came up on stage and presented me with a bouquet of red roses. We took our bows and we felt like the toast of the town. Then back to the hotel room I went to relieve the sitter while Leon organized back stage. I rolled up my sleeves and thought what a contrast, as I spent the rest of the evening washing out dirty diapers in the bathroom sink."

Then there was the time the elegant Vancouver hotel phoned Mandrake for help because another magician's doves had flown into the high chandeliers and no one could catch them. A banquet was planned for that evening and they were in a panic. Mandrake, with his great experience in magic, caught all the birds in no time.

See the photo of Mandrake in Las Vegas in 1945 when the Last Frontier was one of only three casinos on the strip. Enjoy the adventures of Mandrake and the unusual people he met on the road. Meet the real Mandrake the Magician.

Linda Redden, originally from Chester, Nova Scotia, met her husband, Lon Mandrake, at the University of British Columbia. They married, both had careers as high school teachers in the Vancouver area, and raised three children. Lon had fascinating stories of life on the road with his father, Mandrake the Magician, and family. Linda liked to write. So finally they collaborated on this look behind the scenes in the life of Mandrake the Magician. Lon Mandrake is president of the Society of American Magicians #95 and achieved the Order of Merlin in the International Brotherhood of Magicians. Lon and Linda have performed as mentalists twice at the Magic Castle in Hollywood, yearly at Science World in Vancouver and for corporations and private parties for over 30 years.