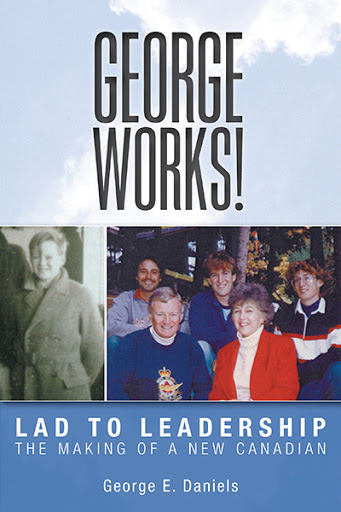 George Works! Lad to Leadership
The Making of a New Canadian by George E. Daniels

British citizen by birth and Canadian citizen by choice, George Daniels pens a fascinating autobiography of a life brimming with love, loss, adventure, creativity, personal and corporate achievement and recognition by his peers, Parliamentarians and Legislators.

Athletically, he has excelled in skiing, swimming and running and completed six marathon races, including the Boston Marathon, and the first World Masters Games while simultaneously raising a family and battling through the challenges of both personal and business setbacks.

A bilingual motivational speaker, he also has found time to serve his community, his Province and his Country as an advocate for the environment, community improvement and important municipal issues, and taking leadership roles in each of the organizations he has served, such as the Andrew Daniels Fish Stewardship Foundation and being a founding member of the Devil’s Glen Ski Club in Collingwood, the Stephen Leacock Festival of Humour in Orillia and the Lake of Bays Heritage Foundation.

"The dynamic unfinished tale of the keep-achieving life of George Daniels, indefatigable air pilot, sales guru, executive, inventor, bilingual Brit who came early to Canada to make high waves in many seas of professions and accomplishment over a long, still-unfinished period of 'George Changing Canada.'"

“For a good anecdote to be truly appreciated, it needs to be delivered by someone with an appreciation of the subject. George Daniels is one of those storytellers and his book chronicles a life fully lived and filled with intriguing anecdotes. Describing the qualities necessary for a good bush pilot, George uses words such as adventurous, instinct, courage, preparedness and self-discipline. These can also be used to describe good storytellers. George is both."

"This remarkable memoir is the stuff of movies---war, pranks, adventure, love, tragedy, triumph and remarkable successes in everything from business to charities. Should be subtitled "The Making of a GREAT Canadian."

"George Daniels has experienced the highs, lows, joys and griefs of life, maintaining an optimistic symbolizing immigrants who came to Canada with faith and hope and who worked diligently to attain a productive life and help build our country.”

“Canadian high schools should put away their Shakespeare books and replace them with “George Works!” From caning to three-line writing, from forced landings to community volunteerism, “George Works!” casts real-life-experience magic which should mesmerize any reader. Plus, it’s Canadian!”

"GEORGE WORKS! is a compelling autobiography of a young English immigrant lad who came to Canada and embraced the best of what our country stands for in every facet of his life. He has experienced the wartime horror of The Blitz, personal and professional setbacks, and has responded with what was once called the can-do spirit. Through more than seven decades, he has dedicated himself to his family, his community, his country and his many professions, and in doing so, has been honoured by the Canadian and Ontario Governments and many other institutions. His is a life well lived and a story well told."

"I have known George for 55 years and have also had the opportunity to be piloted by him in both Ontario and Florida on both wheels and floats. I have been aware in general terms of his many personal and professional accomplishments over the years but with the publication of his book I now know more of the detail supporting these accomplishments which, by the way, are continuing and show no signs of abating." 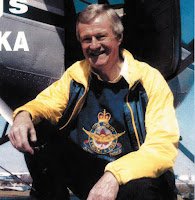 George was urged to join Bartaco/Caltaco as one of Canada's leading Automotive Parts Manufacturers where he rose to the top of Sales & Marketing Executive for NorthAmerica.

In the early eighties he partnered with Larry Schachter to form Marketing Plus/Signature Advertising. His solid track record of achievements include being a founding leader of several prominent Muskoka and Collingwood community groups. All the while, he enjoyed the many ups and challenges of raising 3 sons with his loving wife, Ruth.