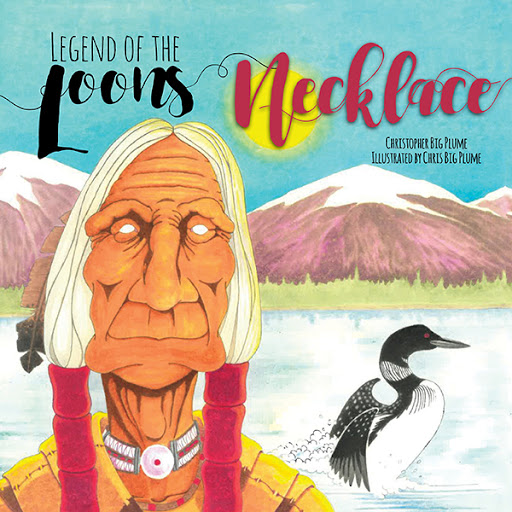 Legend of the Loons Necklace
by Christopher Big Plume

If you’ve ever heard it, you know that Loons have a very distinctive call like no other bird. Their calls echo over many hundreds of Canada’s lakes in spring, summer and fall. But, if you’ve ever seen a loon, you’ll know that they also have very special markings like no other bird. The Secret of the Loon’s Necklace is the traditional Indigenous legend of how the loons got their special neck and back markings. It is the story of old Kelora, a self-proclaimed medicine man who is almost blind. Mocked by almost his whole tribe, he proves that there is still magic in the land of humans and animals. He also proves that being old doesn’t mean you can’t use that magic to help your family and community. The old and those with disabilities, too, have value in our communities. His story shows how much more we can achieve when we work together and respect each other.

Christopher Big Plume is the grandson of Lucy Big Plume, the original teller of this story, which was told to her by her mother and passed down through the generations to this day. Christopher promised his granny he would pass the story on to another generation. He lives on the Tsuut’ina First Nation adjacent to the southwest city limits of Calgary, Alberta, Canada with Tania, his wife of 22 years, and their three cats, Sissy, Jango, and Lobo.